These days the primary qualification for achieving the American dream seems to be adaptability.

Jessica Wakefield and Kevin Hao began preparing for their “first careers” as orchestral violinists in the way that most exceptional musicians do: she at the Juilliard School of Music and the Cleveland Institute of Music, he at the University of Washington and Northwestern University. When they met in 1999, at an orchestral audition outside of Chicago, it was clear they had a chemistry that was only partly associated with their identities as musicians.

“I was focused and serious, I was there to win,” said Jessica. “That’s how most people are at auditions. But he was not. He really stood out because he was just cracking jokes and having fun.”

Temperamentally different but nonetheless compatible, both earned positions at that particular orchestra, and as they grew closer they began to plot out their career paths together: first at the Virginia Symphony (where Jessica was associate concertmaster) and then at the Kansas City Symphony.

Recently the Haos have begun new lives as successful realtors, yet their knack for lively communication remains crucial: to their relationship, to their roles as parents, and to their new career as the dynamic duo of The Hao Team of Keller Williams Plaza Partners.

“A lot of times when we go out to eat, we see couples who just sit there and don’t talk,” said Kevin, a Shanghai native. “We always have things to talk about. When we were young, we were always busy talking about music. … Now we’re both very passionate about real estate, and we can’t stop talking about it.” 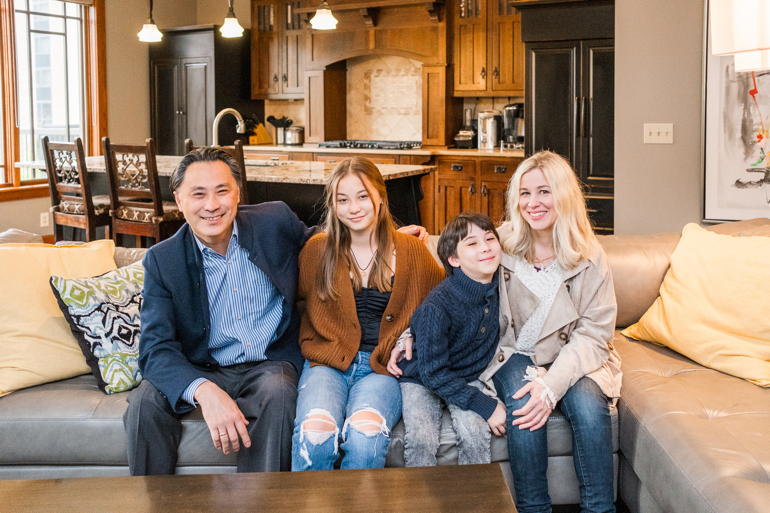 Then he added, with a laugh: “My daughter got so mad that she had to make a rule: No real estate talk at dinner time.” A rule which is often broken, according to the couple’s daughter.

Enter Leila, 15, and Aiden, eight, both essential members of the current Hao “team.” They weigh heavily here because it was largely their appearance that motivated Jessica and Kevin to expand their world beyond orchestral playing.

It was when Leila entered kindergarten that it became clear that The Pembroke Hill School was the best fit for her curiosity and creativity. Because Pembroke was barely within most orchestral musicians’ budget, the couple had to take a hard look at their financial future.

“Without the private school, we could have got by,” Kevin reflected. “But with school and everything else, we just couldn’t do it.” Meanwhile the plan was to “keep Leila there as long as we can,” Jessica said. By the time Aiden came along, Leila was fully entrenched at the school.

“The more we muddled through, the more she loved Pembroke and wanted to stay. And we thought, it’s not fair if Aiden doesn’t get to go there and she does, and what are we going to do about that? So that became a real sticking-point.”

It wasn’t long before Aiden was school age, and after a year at the Foreign Language Academy, he too delved eagerly into Pembroke Hill. What to do? 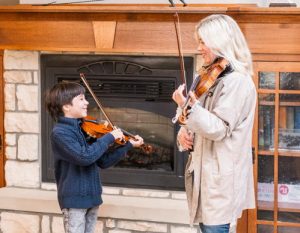 Jessica had long possessed a latent fascination with property ownership, instilled chiefly by her mother, a German immigrant who was awe-struck by how easy it was to own a home in America. “They bought a house when my father was a graduate student,” Jessica said. “My mother said, this is amazing, this is the best thing ever!”

Later her mother worked for a pension consulting firm and continually preached the lesson of “get your financial house in order early on if you want to retire and have any money,” Jessica said. “Especially if you’re a musician.”

Thus the seed was planted, and when Jessica completed her first transaction as a licensed realtor (she bought herself an Overland Park home through a legally complex “For Sale By Owner” transaction) she felt an unprecedented sense of exhilaration.

“This is why I became a realtor, because I loved it,” she said. “It was crazy: I think a lot of people faced with that set of circumstances would think, this is hell on earth. But I thought it was amazing. It was just this huge challenge.”

The idea of leaving music for real estate was on no one’s mind at the time, though. The couple married in 2003, Kevin moved from Virginia to join the Kansas City Symphony, and Leila was born in 2006. Everything seemed fine at that time: The Haos quickly became respected members of Kansas City’s musical community, and the Symphony began an upward trajectory that required huge amounts of energy from everyone.

In fact, it wasn’t long before membership in an increasingly high-profile orchestra began to take a toll on the family, and when the Kauffman Center open in 2011, this became even more pronounced. “Whenever we’d go out performing at night, Leila was very unhappy,” Kevin said. “And I understand why: Kids need you.”

About the time that Aiden was born, Jessica and Kevin were seeking other outlets for their creativity. “I wanted Mommy time with my toddler,” Jessica said. “With the nights and the weekends, it was hard.”

It’s an open secret that orchestral musicians, and string players in particular, often experience low levels of job satisfaction. Partly it’s because they study to be soloists and instead end up sitting in a long row of section violinists. “All of us trained to have creative expression, to have beautiful sound,” Jessica said, “to have an individual voice and expression.”

And, after all that training to “be special,” an orchestral string player is promptly asked to suppress that individualism. “There are people who are temperamentally suited to orchestras,” Jessica said. It’s just that neither she nor Kevin seemed to fit that mold, at least not long-term.

So when Jessica began to get serious about real estate again, she transitioned with ease into being her own boss. “There’s no halfway in real estate or music,” she said. “They are both professions that require complete dedication.” After trying to do both for four years, Kevin was ready to concur: “You can’t do both.” 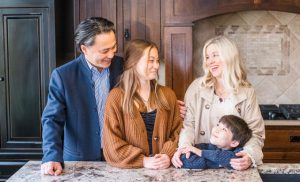 It thus felt natural when he followed in the career transition. “I still love this beautiful music,” he said. “But I enjoy it more now that I have this other job. My individuality is expressed in real estate, where everything is on you. … When the client is happy, when you have a beautiful listing, you feel like you’re doing something good, and you have a say in it.”

Kevin is the son of a famous Shanghai composer, conductor, violinist, and teacher: He Zhanhao co-wrote (together with Chen Gang) one of the most famous classical compositions in the Chinese repertoire, The Butterfly Lovers Concerto for violin and orchestra, which Kevin still performs in China with his octogenarian father on the podium.

Nevertheless, Kevin never had to worry about parental approval of his new career: He is from Shanghai, after all, the eye of China’s commercial cyclone. “Shanghai people are very business oriented,” he said. “And if you have a good business sense, you don’t need an MBA. … They are happy with what we have achieved.”

In the end, they each had to make a choice. “There’s no halfway in real estate or music,” said Jessica, who is laser-focused on growing the business even beyond the Kansas City metro, “and perhaps in different states, or even in Shanghai. Yes, there is a Keller Williams franchise in Shanghai!” (For more about the couple’s local franchise, see thehaoteam.com.)

Meanwhile the family is alive and thriving in Brookside. In addition to the violin, Aiden loves video games, math, chess, and ice hockey. He hopes for a career in robotics and/or video-game design, perhaps.

Leila is involved with art, soccer, hockey, and cheerleading and said in the future she might want to do “something in the field of medicine,” such as psychiatry or dermatology. 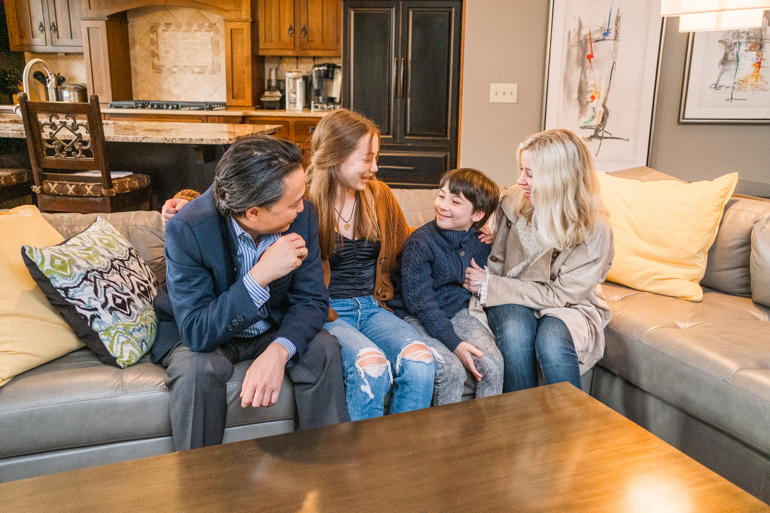 Both youngsters say that international living suits them fine. “They love Chinese culture, they love the food, they love Shanghai,” Kevin said. Both speak some Mandarin, and both are accomplished on the violin. Brookside’s 1920s-era homes and its “walking culture” remind them a lot of the area of Shanghai where Kevin grew up.

Perhaps the local music scene is poorer without them, but the Haos have found their own balance. “Real estate is an amazing career with incredible flexibility and a myriad of different options to pursue,” Jessica said, “and we are loving every moment of it.”