CANE MUTINY: Symphony principal shows the saner side of being an oboist

When oboist Kristina Fulton spends hundreds of hours carving Mediterranean cane into paper-thin strips of reed, she has a single purpose in mind: to produce the most gorgeous sound possible. “I’ve always loved listening to opera singers, or even amazing jazz greats, Ella Fitzgerald or Nina Simone,” said the San Diego native, who has held the Kansas City Symphony’s Shirley Bush Helzberg principal oboe chair since 2011. “Great diva sopranos are what I gravitate toward: If you can replicate that on the oboe, that is as good as it gets.”

Kristina’s initial reasons for playing oboe were purely practical. She was already studying piano when she picked up the flute in fourth grade and became proficient. Later she even played the mellophone, that odd flugelhorn-like brass instrument. 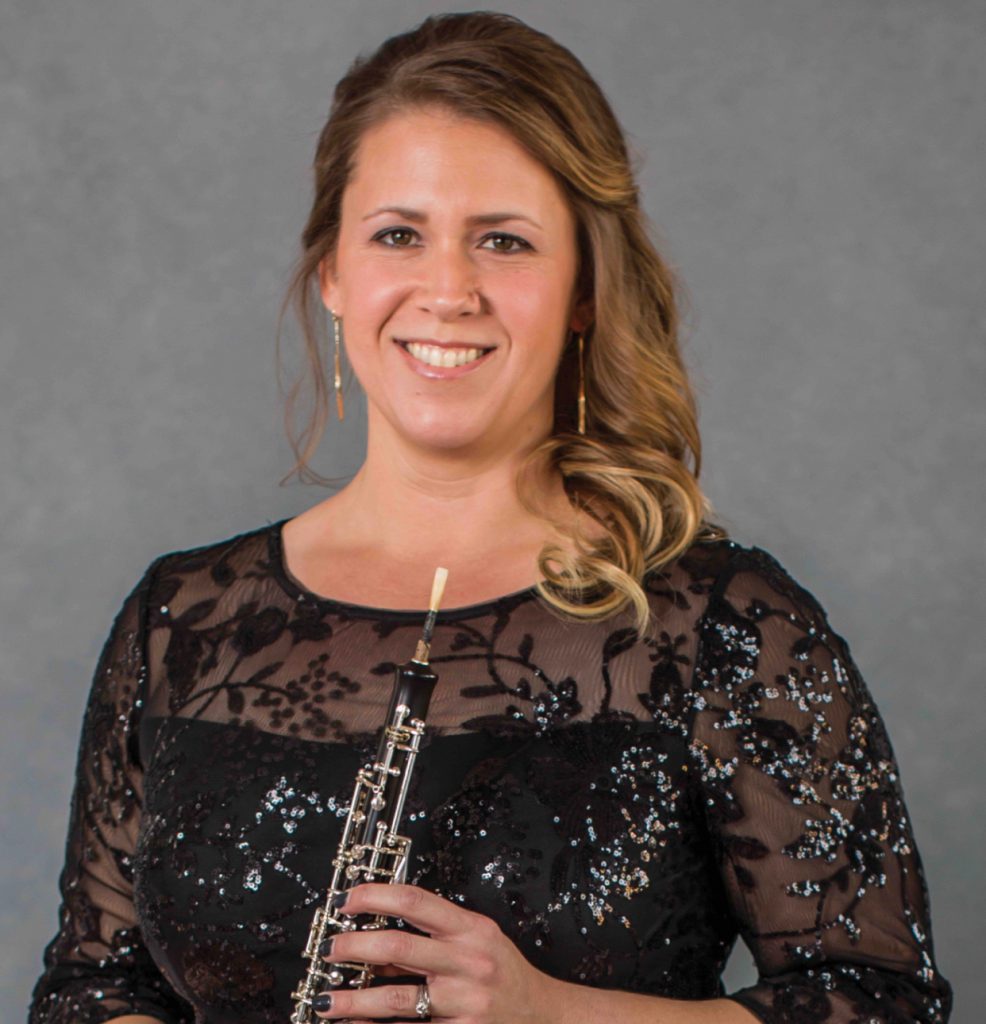 “And I remember my mother saying, you know, oboe and French horn get really good scholarships when you go to college,” she said with a laugh. “So I ended up learning how to play both.”

Eventually she would fall in love with the oboe, despite the well-known treachery associated with mastering the instrument. “By my junior year in high school, I had decided I wanted to go to conservatory, and I thought it was going to be just fine. I was not at all scared about being an oboist.” She would eventually do well under the tutelage of two great American oboists: James Caldwell at Oberlin and John Ferrillo at New England Conservatory.

The oboe is not for the pusillanimous: Every time you hear an oboist perform well, a series of tiny miracles is taking place. The instrument itself is carved from grenadilla, which grows primarily in southern and northeastern Africa and is one of the most expensive woods in the world. The reeds are from a rare cane called Arundo donax, which the performer must carve and shave into shards and then bind with nylon or silk thread.

But that’s not even the worst of it: Only about one in five reeds is usable for a professional concert, and a given reed will endure only a week or two of heavy playing.

It’s no wonder that oboists have a reputation for being oddballs, Kristina said. “The instrument would make anyone into a type-A neurotic. Everything is working against you … weather changes, humidity changes, pressure changes. Weather affects literally everything on our instrument.” The oboe is such a finnicky beast that even the sanest people find themselves becoming obsessive. And although she admits to being a perfectionist, Kristina has tried very hard to avoid becoming “that crazy principal oboist. I don’t want to be that person.”

She has managed to skirt this partly by achieving “a work-life balance,” she said. It helps that she is not married to a musician (her husband, Cameron, works for a company that builds greenhouses), and that her hobbies involve plenty of physical activity. She loves cycling, mountain climbing, and (believe or not) Muay Thai kickboxing.

Playing the oboe is, after all, a whole-body activity: In her boxing training she often encounters skilled professionals, surgeons and such, who are “very aware of their body, of form, of how the body is moving.”

Whatever she’s doing, it’s working. Kristina is recognized as one of the nation’s leading oboe principals, something she attributes partly to terrific training. Even in San Diego she studied with men and women who were pupils of the great John Mack, among them Peggy Michel. In John Ferrillo at New England, she found someone who had studied both with Mack and with John de Lancie, the representative of the other “school” of oboe playing. (Oboists still talk of the “Mack school” and the “Philadelphia school” of playing, the former with its velvety tone, the latter with its larger, more expansive sonority.)

She speaks very highly of John Ferrillo, whom she first heard play when he was principal at the Metropolitan Opera. “I remember the hair standing up on my arms, chills through my whole body: amazing sound, amazing expression.” Later she heard him perform with the Boston Symphony, where he had subsequently become principal oboe.

Again, the chills. “At that moment I said, I’m going to go study with him,” she said. “I can’t even put into words the way he sounds live: It’s just unbelievable. … It’s like a melding of the two schools of playing. He plays like an opera singer: He was, after all, at the Met for half of his career.”

Michael Stern, music director of the Kansas City Symphony since 2006, who was instrumental in hiring Kristina in 2011, has consistently lauded both her artistry and her leadership abilities. “It is often said that the principal oboe position is the de facto concertmaster of the wind sections,” he said. “In our Kansas City Symphony, Kristina embodies that role, completely. She is a leader. What’s more, she is a marvelous musician, as her colleagues will readily attest, and making music with her is joyously easy.”

Michael confirms that Kristina does indeed achieve her goal of sounding as close to an opera singer as humanly possible. “Above all, I admire so much the vocal quality in her playing,” he said. “The Kansas City Symphony is indeed fortunate.”

While many oboists overthink the whole “carpentry” of reeds and instrument maintenance, Kristina views the dilemma philosophically. She may spend hours every week shaving reeds, but she said in the end you have to “just go with the flow. Sometimes you’re not going to have reeds that work, you just play on whatever you’ve got.” Her teacher at Oberlin, James Caldwell, helped instill in her the attitude that “just because it’s not perfect, doesn’t mean you don’t do your job.”

At the end of the day, she said: “It’s not about me. In an orchestra, it doesn’t matter if I’m having a ‘bad-reed day.’ Who cares? If I can’t play the music and if I can’t make something happen with my colleagues, then I’m not doing my job right. The reeds don’t matter.”

Michael said this attitude is one of the things he admires most about Kristina. “In my experience, sometimes oboists get obsessive and really drill down on the mechanics of the instrument, in ways that other people, even other musicians, can’t always grasp. There can be a lot of fretting about leaks and cracks on the oboe itself, and of course, the endless daily angst around reeds. But with Kristina, it’s always about the music, about the phrase, about the sound, and ultimately, about giving the best performance possible.”

For her part, Kristina feels fortunate to have arrived in Kansas City the year the Symphony moved into the Kauffman Center, and she is determined to stay as long as possible. Part of her joy with this orchestra is in the collegial atmosphere, she said, especially with her fellow wind principals.

“What I like about her is that she’s always concerned about the right things,” said Michael Gordon, principal flute, who sits just to Kristina’s right in the orchestra. “We’re very different in a lot of ways … but we have genuine conversations about how we want to play something, and real flexibility about how we work with each other.”

The relationship between these two is essential. “We really are at the front and center of the whole wind and brass sections,” Michael said. “We play constantly, either in unison or in octaves with each other. And the sound of the flute and the oboe blending sort of lays a shimmer on the sound of the whole orchestra, if it’s done well.”

An orchestra is indeed a community, and a tight-knit one. Many principal players spend their early years focusing on being the best soloist they can be, Kristina said, “and you get into an orchestra and there’s definitely a shift toward worrying about how you fit into that ensemble. How can you make it better?”

The Kansas City Symphony, one of the few orchestras in the nation that has announced it will be “on contract” for the 2020-2021 season, has much to offer Kristina and her colleagues nowadays. “We have a really supportive community, and an amazing hall,” she said. “And the players we’re hiring every year are just getting better and better.”

For more information about the Symphony and its upcoming activities, including a “reimagined” 2020-2021 season, stay tuned to kcsymphony.org. To reach Paul Horsley, performing arts editor; send an email to paul@kcindependent.com or find him on Facebook (paul.horsley.501) or Twitter (@phorsleycritic).