Mr. Richard Scott Shackelford of Leawood, Kansas, is pleased to announce the engagement of his daughter, Margaret Frances Shackelford, to William Andrew Verret, the son of Mr. and Mrs. David Wayne Verret of Coppell, Texas. The bride-to-be is also the daughter of the late Mrs. Shackelford. Meg is the granddaughter of Dr. Cletus Troy Frerichs of Beatrice, Nebraska, and the late Mrs. Frerichs, and Mr. and Mrs. John Hutt Shackelford of Prairie Village, Kansas. She is a graduate of Shawnee Mission East High School. Meg earned a bachelor of science degree in strategic communication from Texas Christian University. She is a member of Chi Omega sorority and is employed with VARIDESK in Dallas, Texas.

Her groom-elect is the grandson of the late Mr. and Mrs. William Warren Ware and the late Mr. and Mrs. Joseph Simon Verret, Jr. Will is a graduate of Jesuit College Preparatory School of Dallas. He received a bachelor of business administration degree from Texas Tech University. Will is a member of Phi Delta Theta fraternity and is employed with Accenture in Dallas. They will be united in matrimony at Second Presbyterian Church in Kansas City, Missouri on February 9th, which is the 67th wedding anniversary of Meg’s paternal grandparents, Helen Haigh Shackelford and John Hutt Shackelford. 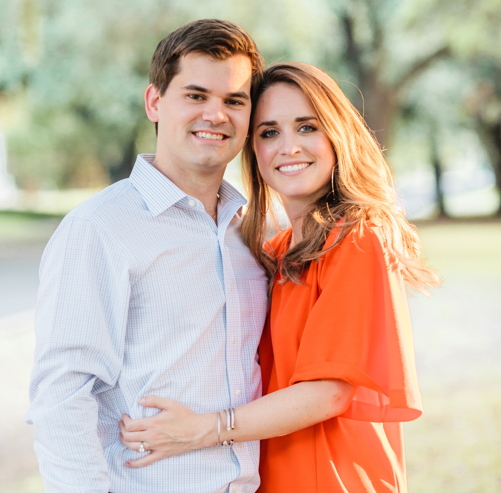 Also featured in the December 8, 2018 issue of The Independent.
Photo Credit: Jen Morley