The opening of Act I of Victoria Morgan’s Cinderella, which the Kansas City Ballet performs through May 18th, depicts a drab, oddly ambiguous scene that conveys the title character’s “before” life. Stage right is what appears to be a row of dingy shops, almost crooked enough to suggest the sets of The Cabinet of Dr. Caligari, yet the fireplace stage left suggests we are inside Cinderella’s home. Thus is established, with Peter Farmer’s set and costume designs, a sort of dreamlike world that is neither this nor that, setting a tone for a production that is both lavishly beautiful and a bit confounding at times.

Victoria’s distinguished take on this classic mixes elements of classical ballet with the comically modern, and it has been set with loving care by dancers and choreographers who were a part of its Cincinnati Ballet creation (including KC Ballet artistic director, Devon Carney, who was working at Cincinnati at the time). Just as notable as the dance here is the astounding music by Prokofiev, which the Kansas City Symphony in the pit, led by KCB music director Ramona Pansegrau, performed with obvious relish—a Kansas City premiere, no less, of one of the greatest orchestral scores of the 20th century, to be included right up there with ballet scores of Tchaikovsky and Stravinsky.

Our humble heroine is sweeping through much of Act I, and Victoria underscores Cinderella’s girlishness with quick, deliberate movements that contrast with the broad balletic sweep that the Fairy Godmother will soon bring to the stage. Molly Wagner, the Cinderella of the opening-night cast (Laura Hunt is the other), seemed to thrive on this delicacy and sweetness, imbuing the role with a humble charm that, later in the ballet, will slowly blossom into the maturity of a full-blown ballet dancer. She even performs a clever pas de deux with an imaginary lover, a.k.a. her broomstick, a standard conceit here that moviegoers know from Fred Astaire’s “riff” on it in the famous coat-rack dance of the 1951 film Royal Wedding. (In Rostislav Zakharov’s choreography for the original Bolshoi Cinderella in 1945, however—if the 1960 filmed version depicts it accurately—the broom-with-bowler-on-top is leaning against a chair, stationary, allowing Cinderella to dance around it with a bit more grace and ease.) 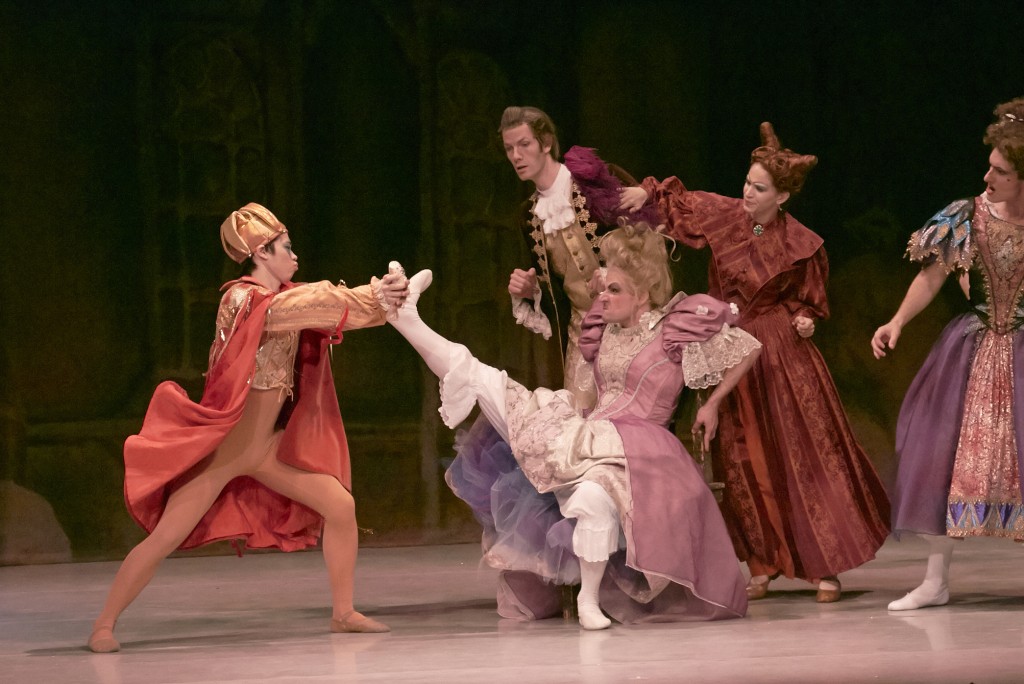 But before this we are introduced to Cinderella’s problematic “family,” including the loving and sympathetic father (Geoffrey Kropp) who laments her abuse at the hands of his new wife and her ugly daughters but seems oddly helpless to prevent it. (In most versions of this tale it remains a mystery as to why he doesn’t intervene. Henpecked? Hopeless alcoholic, as Nureyev suggested? This version offers no clear explanation, either.) The stepmother is presented as a busybody more than anything else, and though she’s not given much quality dancing to perform, her portrayal by the charismatic Angelina Sansone on opening night made her perhaps a more sympathetic character than she’d normally be. It’s the evil stepsisters, danced in bad drag by Ryan Jolicoeur-Nye and Logan Pachciarz on opening night, who are the real villains in this tale. It was apparently Frederick Ashton who came up with the idea of casting the sisters with men, in his 1948 London version (in which he also dispensed with the action-halting Act III variations, as does this version), and though it has its comic potential it has a tendency to draw the attention from the real dancing. Indeed, whenever the sisters are onstage the scene is really “about” them and little else, somewhat to the detriment of a balanced story line.

Scene 2 introduces the Seasons, represented by petite Laura Hunt (Spring), expansive Sarah Walborn as Summer (with Kirk Bookman’s lighting design treating us to a warm, sunny-orange glow), Taryn Mejia as melancholy Fall (complete with orange leaves dropping) and cheerful, chilly Tempe Ostergren as Winter. Cute kids from the Ballet School, dressed appropriately for each season, introduce each of the four, as the Fairy Godmother (Kaleena Burks) supervises. The music is at its best here, with ample instrumental solos and fascinating combinations, colors and contrasts. Prokofiev’s score is pithier and more acidic than that for Romeo and Juliet, and its stroke-of-midnight scene—with kids holding up cut-out numbers with each stroke—is one of the most jarring moments of any ballet score I know. (The machinery sounds more like a battlefield than a clock mechanism; this was, after all, ’40s Russia!) 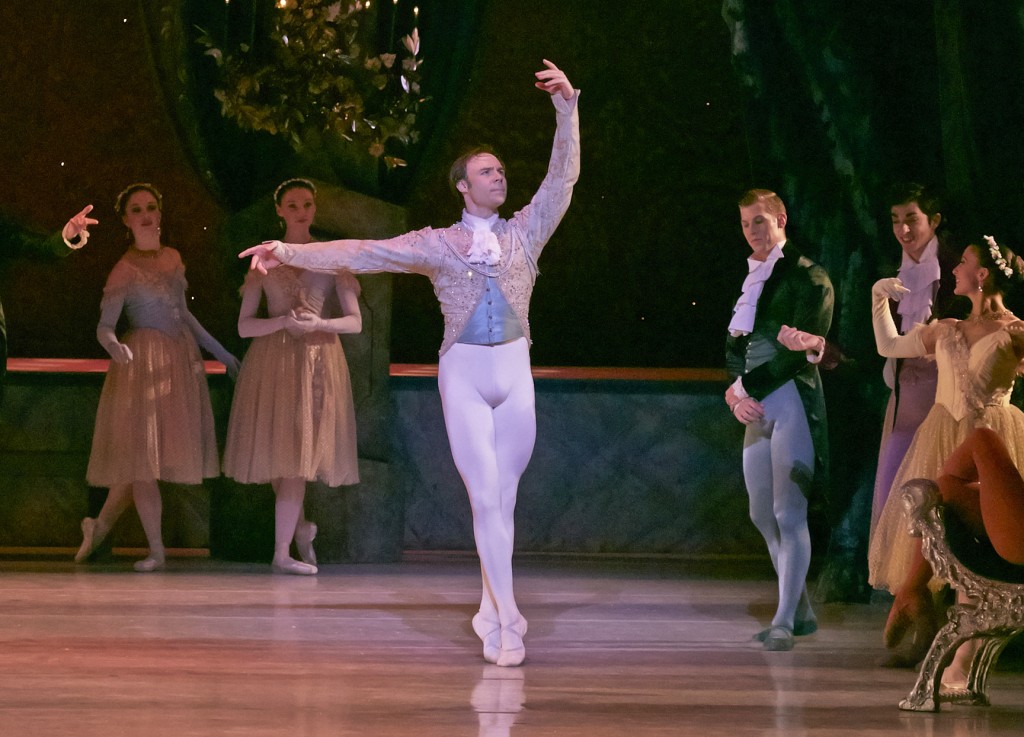 Act II with its elegant ballroom décor introduces the Prince, dashing Anthony Krutzkamp in dazzling white-and-pastels, who after some broadly played duets with the Ugly Sisters and a series of virtuosic turns of his own, finally focuses on the object of his attention. All around, couples dance, but by the end of the ball the Prince is desperate to find the mysterious girl in the (curiously plain-looking) white dress. Yoshiya Sakurai is whimsically playful as the Jester, and Anthony displays some of the stately, heroic leaps and steps of the grand ballet tradition. (He will be greatly missed, as he has announced he’s retiring after this season.) In Act III he and Yoshi “travel the world” in condensed time, in front of a scrim, before arriving at Cinderella’s house and following through the antics of trying the slipper onto the sisters’ oversized feet. Cinderella not only has the right-sized foot, she has the matching shoe.

In an epilogue, the Prince enters holding Cinderella by her calves, and they dance a pas de deux before mounting a carriage drawn by dancers-as-horses. Instead of stage-magic and pumpkin transformations we observe only a carriage circling and then leaving. Luckily Prokofiev’s music provides a subtle but rousing conclusion, bringing the ballet to a close that is as satisfying musically as it is balletically.

To reach Paul Horsley, send email to phorsley@sbcglobal.net or find him on Facebook (paul.horsley.501).