The best summer festivals highlight the unexpected: The juxtaposition of idyllic landscapes with the sort of high-end performances that we usually experience in urban settings sometimes permits us to view great art in fresh ways.

Three hours north of Kansas City, nestled in verdant Iowa hills, stands one of America’s most delightful and distinguished opera festivals. Des Moines Metro Opera, located on the Simpson College campus in Indianola, consists primarily of three mainstage productions each May and June, although these actually form just one portion of this organization’s year-round activities. (DMMO is Iowa’s largest performing-arts organization, both in terms of budget and of impact.)

Performed in the Blank Center for the Performing Arts’ 467-seat Pote Theatre, this uncannily intimate festival draws tourists from more than 40 states and several foreign countries, and its high-end productions frequently rival those of any American opera festival I can name.

Founded by artistic director Robert Larsen and Douglas Duncan in 1973, and currently led by general and artistic director Michael Egel, DMMO has carved out a niche partly through consistent artistic excellence, but what makes it unique is the extraordinarily “personal” manner in which one is able to experience world-class opera.

Even Opera Theatre of St. Louis’ 950-seat Loretto-Hilton seems large next to this semi-circular “living room” of a theater. The beautiful Blank Center is outfitted with a two-level lobby, ample amenities, and notably gregarious staffers. After each performance, cast and crew gather in the lobby to chat with the public, and they are quite game about entertaining even detailed discourse about the operas.

My schedule permitted me only to see the first two of these, starting with the beautifully paced and solidly sung La Bohème, which I attended on July 5th. Robert Little’s sets seemed willfully designed to upset the equilibrium: The fragmented Cabinet of Dr. Caligari-esque interiors stood in almost mocking contrast to the gentle, Monet-inspired cityscape.

Cardenas, a frequent DMMO collaborator, showed special aplomb in the intimate of moments: One felt genuine chemistry not just between the two lovers, Rodolfo (Joshua Guerrero) and Mimì (Julie Adams), but also at moments in which the poverty-stricken Parisians commiserated over small things. Christie’s deft conducting was essential in making Acts III and IV click: He moved singers and orchestra along at a brisk if sympathetic pace. For me, this ending often gets bogged down with draggy tempos that just prolong what is, by this time, a fairly obvious outcome.

Adams was an assertive, rather than a timid, Mimì at the outset, which felt odd in Act I but more convincing for the “worldly” Mimì of Acts III and IV. She sang with heroic force and gathered pathos as the opera progressed, displaying a handsomely multi-hued soprano. Guerrero was an amiable Rodolfo, passionate when necessary and truly stricken to the core in the final moments.

What I liked, especially, was the variety of colors and textures in his voice, which in many respects is not a traditional “hey-there!” sort of tenor but rather a more humane instrument. Mané Galoyan sang sweetly but played up Musetta’s flightiness a bit much in Act II, though I did find her Act III quarrel with Marcello pointedly compelling. Perhaps the most convincing cast member was Thomas Glass, who sang Marcello with a rich, remarkably mature baritone and moved about the stage with the command of a fully realized character. Timothy J. Bruno (Colline), Brian Vu (Schaunard), and Matthew Lau (Benoit) filled out the admirable cast.

STOP ME BEFORE I KILL AGAIN

Not even the wrenching sorrow of the final act of Bohème can prepare a summer festival-goer for the onslaught of inhumanity that is Wozzeck, which I attended on opening night, July 6th. I should perhaps say up-front that I love Alban Berg’s masterpiece as I love few operas. But actually sitting through an exceptional performance of it (which, fortunately or unfortunately, this was) can be downright traumatizing. It is a perfect illustration of the notion that great art is not always pleasant: Wozzeck is something you “love” despite the pain it causes. An equivalent, in cinema, might be Full Metal Jacket; in theater, King Lear or Long Day’s Journey into Night; in literature, almost anything by Cormac McCarthy. Yet unlike those works, Wozzeck offers little consolation and even less “catharsis.”

It is an astonishingly compact snapshot of just how awful society can be during its darkest hours: and of the annihilating impact that this awfulness can have on a single human being. Wozzeck is everyman, in a sense, but above all he is dirt-poor, marginalized, and of unsound mind. Neither money nor love can save him.

Begun in 1914 but not completed until 1922, the piece bears the stamp of “Corporal Berg’s” experiences during World War I and its aftermath. But it is actually an adaptation of an unfinished theater work from the 1830s (Georg Büchner’s Woyzeck)—an indication, perhaps, of the extent to which its themes of human cruelty and dehumanization are not specific to any one time or place.

Cast in 15 continuous scenes that are often no more than a few minutes each, Wozzeck presents enormous logistical challenges for any production team, which must find a way to delineate each set-piece with lightning-speed costume and prop changes. It is also a fractured love-story, which gives it theatrical legitimacy by showing us a relationship we can at least attempt to connect with. As such, the “romance” between the title character (sung by the peerless Michael Mayes) and his common-law wife, Marie (Sara Gartland) is crucial to drawing us in.

Their grim, mirthless love has resulted in a son, whom Wozzeck can hardly bear to look at, and the dynamic swirling around this family tragedy is at the core of the opera’s pain. Tzykun has portrayed these strange domestic moments in framed vignettes: Her set consists of an enormous black wall made up of moveable “shards,” which shift and slide perilously about to create spaces large and small—and occasionally, little rooms in which Marie and the child (mostly) interact. Wozzeck, for the most part, is blocked from entering these tender scenes, and considering his mental state, it’s probably just as well he stays out. 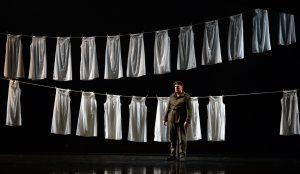 Mayes conveys Wozzeck’s herky-jerky, frenzied paranoia with amazing naturalness. (Wozzeck is perhaps mentally ill, yes, but he has also been driven out of his mind by drugs and by harrowing experiments courtesy of the sinister Doctor, played harrowingly by Zachary James.) Mayes also manages, miraculously, to pull off something that few artists have achieved: Instead of barking the dialogue, he actually sings it. And we quickly realize that Wozzeck’s words sound grislier when presented as beautifully sung “melody.” (How comically disconcerting it is, for instance, to hear an opera singer with such a deliciously hued baritone sing, after being accused of relieving himself on the street: “But Doctor, when nature calls…?”)

James, as the hunchbacked Doctor, is frightening. One yearns to laugh, but his lumbering physicality and didactic manner (not to mention his head-box-with-skull-screws and other fun contraptions) are so horrifying that one can’t help mentally fast-forwarding to Nazi experiments of the ensuing decades. The Doctor is not Wozzeck’s only problem: The disheveled anti-hero is also being driven to despair by his Captain (Corey Bix), who mocks his mental state and for the most part plays R. Lee Ermey to Wozzeck’s Vincent D’Onofrio (to allude again to Kubrick’s film). Bix’s brilliantine tenor is on full display, as is his enormous (prosthetic) belly: He is his company’s smug, well-fed officer-bureaucrat.

Worse, Marie is being courted by the ridiculously dandified Drum Major (Robert Watson), and eventually the whole village is mocking the “cuckolded” Wozzeck. It was here that we became aware of McIntyre’s stealthy direction and sensibility: What had begun as a small-scale, almost manageable set of conflicts begins to unravel into an out-of-control spinning wheel of increasing centrifugal force. Wozzeck suffers terrifying nightmares, which Kate Ashton conveys with jolting lighting shifts. Now and then a group of mysterious, shadowy figures (which are lit so that you can barely make them out) move noiselessly about the stage. As McIntyre injects more mystery at every turn, we feel we’re moving toward an inexorable downward slide that we don’t know how to decelerate.

Tzykun’s costumes are indicative of class and rank: But when the troops are slumbering in their “long-johns,” they could just as easily be ghosts as fellow-soldiers. In moments of panic, Wozzeck is comforted, barely, by his buddy Andres: Tenor Gregory Warren makes a notable impression in this small role, with solid vocal equipment and a sympathetic manner that makes him seem like the only likeable character onstage. “Happy is the hunter’s life,” he sings, his perhaps overly carefree nature standing in stark contrast to Wozzeck’s dissolution. 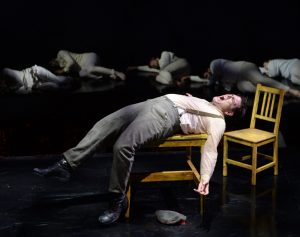 Marie, for her part, feels just as trapped as Wozzeck, and yet when the final music hues to a murderous climax, what we feel more than anything is the inevitability of it all. It was here, and in the hauntingly tonal, almost comforting D-minor epilogue, that we became fully aware of Neely’s mastery of this thorniest of scores.

We can only hope that Wozzeck is not a foreshadowing of our own future, though there is little reason to believe that the horrors it depicts are unique to the 19th or 20th centuries (or indeed that they are not already in play throughout the world).

In any event this surely stands as one of DMMO’s finest moments, and if you can catch one of the remaining three performances, you certainly should.  —Paul Horsley