Devon Carney’s great affection for classical ballet stands front and center in his lovingly choreographed Swan Lake, which the Kansas City Ballet introduced here in 2016 and is currently revisiting. This newly refurbished version, with sets from Ballet West that are even more imposing and elaborate than those used the first time around, opened on Valentine’s Day at the Kauffman Center and runs through February 23rd. On opening night, the company looked uniformly “in command” of this schmaltziest and most beloved of all full-length ballets, with leads who danced with consistent polish and with an ever-improving corps. 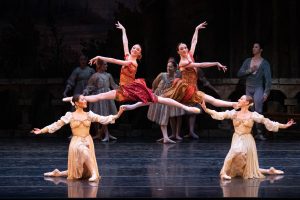 Devon has choreographed a number of large works since taking up the post of artistic director here in 2013, including ballets that he had himself danced during his long career as a principal dancer primarily at Boston Ballet: Giselle, The Nutcracker, The Sleeping Beauty, and most recently Romeo and Juliet and Peter Pan. But few of these works have demonstrated his love for the foundational traditions of France and Russia (via Great Britain and the centers of American dance) as this one. Rarely have we seen this company dance with such care for detail: with such attention to minutiae and to what one can only call “passion.”

Emotion is at the core of any great stage work, and the most effective parts of this Swan Lake are the moments in which either the dance or Tchaikovsky’s music are the most heartfelt: Occasionally, as in the love duets, these moments coincide. Poised somewhere between myth and fairy-tale, Swan Lake tells a tale that we all hope we can connect with: A young person wants to wed for love despite social and family pressure to “marry well,” and must fight an internal battle in order to discover what love is. On the surface, Swan Lake is about a Prince whose family wants to pair him with a young woman of equal social standing (it is unclear as to whether we are to think ill of them for this). But it is also about deception, avarice, and (perhaps) the oddly seductive power of the “bad girl.”

Craig Wasserman as the Prince’s buddy, Benno, brought wit and a measure of virtuosity to the proceedings, and his energetic trios with Lilliana Hagerman and Taryn Mejia were among Act I’s highlights. (Casts alternate throughout the run, with Amaya Rodriguez and Amanda DeVenuta stepping into the roles of Odette/Odile and Lamin Pereira and James Kirby Rogers as the Prince in some performances.) Six princesses dance for Siegfried, each in a distinctive style and rhythm, but alas he has met his love, on a moonlit lake in the words, and he only has eyes for her.

He meets Odette while out hunting with his buddies, who almost shoot her because they mistake the swans-transformed-into-pretty-girls for actual swans. There’s a curse on them that can only be broken by the “first love” of a steadfast beau (both of those things being hard to find). Von Rothbart, the evil sorcerer (Cameron Thomas), tricks Siegfried into falling for Odile, who looks exactly like Odette except that she’s wearing black and way too much makeup.

The Act I pas de deux was lovely, with Kaleena convincing us that she really is new to “this thing called love,” and Fu finding humility in that helpless feeling that comes over a youngster when he or she first “falls” really hard. Naturally he pursues her, though only in the most acceptably structured manner. 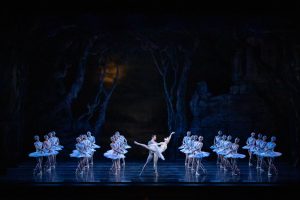 The corps of 24 ladies, dressed in subtle off-whites by Peter Cazalet (who also created the elegantly huge scenery), gave Devon a chance to demonstrate that the Ballet’s efforts to build a larger company are paying off. Organized in six tidy rows of four women each, they gave a momentary nod to Balanchine-like architectural formations before moving into circular, less strictly geometric motions of the sort that Devon seems to prefer. (In Act II, the patterns begin with four rows of six dancers each, as a sort of counterpoise to Act I.)

Act III also came with its “national” variations, of course: The initial “Spanish” with its flashy tambourine-tapping and its bizarre rhythms was the most exhilarating. “Neapolitan” featured a solid duo (Emily Mistretta and Gavin Abercrombie) and four auxiliary dancers, and “Hungarian” was a light-spirited dance for Kelsey Hellebuyck, Dillon Malinski, and eight busy partners.

Odile ruins the party and Siegfried accidentally falls for the wrong girl. This could only be achieved through a #pirouettechallenge, in which both principals delivered a series of dazzling turns with confidence and skill. Siegfried was so busy falling for the bad girl that he never noticed Odette, waving her arms in an upper window, trying to help him realize that it’s not her down there. Too late! He’s already promised to wed.

By the final act, the orchestra and especially the winds and brass had come to life in the pit (the Kansas City Symphony appeared with Ramona Pansegrau at the helm): We were immediately struck by just how significant Tchaikovsky’s music has been to the longevity of this piece. Just as important here was Trad A Burns’ stunning lighting of the final swan scene, with a bluish translucence that instantly evoked a sort of dreamy otherworldliness. Odette was disconsolate, and the corps transported us to their dream-world just in time to inure us to Rothbart’s appearance: already looking a tad ineffectual at this point, even Papageno-like with his feathers. So it went, and by the finale we were ready to accept that the Prince and Odette must drown together (in this case, jump off a high rock, à la Tosca) in order to find peace.

Performances of Swan Lake continue through February 23rd. For tickets call 816-931-8893 or go to kcballet.org. To reach Paul Horsley, performing arts editor; send an email to paul@kcindependent.com or find him on Facebook or Twitter (@phorsleycritic). All photos by Brett Pruitt & East Market Studios

Many of the shows we are highlighting this fall are actually indoors! But always confirm your event a day or two ahead.   SEPTEMBER August 27-September 19 Kansas City Repertory…