That Rigoletto is regarded as one of Verdi’s most beloved operas might seem surprising considering what an ugly story it recounts. First performed in 1851 but based on a tawdry Victor Hugo play from 1832 (which was banned from the French stage for half a century), it tells of a mean-spirited jester who serves in the court of a lecherous Duke who has surrounded himself with a klatch of highly unpleasant courtiers. Making this opera into a satisfying evening of theater can be a tall order, for it sometimes looks better on paper (“featuring such hit tunes as ‘La donna e mobile’!”) than it does in the realization. Yet opera-goers continue to love this piece, particularly if the three principal roles have been suitably cast. 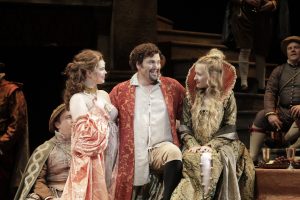 The Lyric Opera of Kansas City’s production of the opera, which opened on March 3rd at the Kauffman Center, had much to offer, including appealingly lavish-yet-tasteful costumes (from the Lyric Opera of Chicago) and a serviceably “historic” stage set. Yet on opening night something was missing, and I went out from the theater wondering why this piece remains a favorite.

Despite the piquant silent tableau that played out during the Prelude—with the lead characters playing out past, present and foreshadowed events—David Gately’s stage direction in Act I felt sluggish and unclear. Scott Quinn sang the Duke’s first aria, “Questa o quella,” with a sunny, open-spirited tenor that reminded one initially of you-know-who but could have used a tad more heft and color. Leo An made a strong initial impression as Rigoletto, vocally in particular, though we yearned for more of the oozing pathos that makes us care about this deeply flawed character. His affect could change on a dime, from a smile one second to a look of horror the next.

Lauren Auge sang the Countess Ceprano, who has just had an affair with the Duke, and Evan Edwards was the cuckolded Ceprano. Tim Murray was Marullo, and Andrew Gangestad thundered suitably as Count Monterone, the disheveled nobleman who delivers the dreaded curse on the Duke (for seducing Monterone’s daughter) and on Rigoletto (who is the Duke’s hated “enabler”). 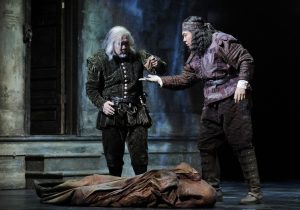 Things began to look up in Scene 2, in which the towering Peixin Chen all but stole the Act as Sparafucile, the hired assassin—both with his golden, deeply rooted bass voice and with his menacingly nonchalant presence. Alice Chung was also commanding in role of Giovanna, Gilda’s maid—her rich mezzo blending seamlessly in the ensembles. Nicole Haslett sang Gilda with a clear, resolute soprano that sounded especially lovely at the top: Though the father-daughter duet lacked strong chemistry, her “Caro nome” was direct and deeply felt.

The action began to gather steam in Act II, with the Duke rallying, slowly but surely, in his big scena, and with An’s Rigoletto negotiating the psychologically complex series of moods and whims—from resignation to a sort of centeredness—which necessarily precedes the second big father-daughter duet. As Rigoletto and Gilda joined in sympathetic despair over the situation (she has inadvertently fallen in love with the despicable Duke), our ears and eyes began to engage. 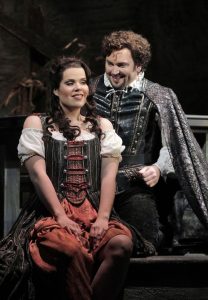 If there is a moment at which this opera finally “gels,” it is in Act III—partly through the Duke’s ironic “La donne e mobile” (sung here with mild charm) but especially through the quartet, “Bella figlia dell’amore,” one of the glories of Verdi’s middle-period output. Here the Lyric did not disappoint, adding the magnificent mezzo voice of Zanda Švēde to the mix (in the small role of Maddalena, the assassin’s sister): Lyric audiences will remember her dazzling Carmen, sung on this stage in 2016, and she still sounds wonderful.

David Charles Abell conducted the Kansas City Symphony capably, and the Lyric Chorus sang adequately. Apparently I was not the only one in the Muriel Kauffman Theatre who felt the low-key nature of the proceedings throughout: Rarely have I heard more tepid applause at a Lyric opening.

Of the dozen or so operas that are regarded as the central Verdi “canon,” during the last quarter century the Lyric has performed only a half dozen, and only three show up with any frequency: Rigoletto, Il trovatore and La traviata. Perhaps it’s time to venture out to some of the tougher, if more rewarding, works.

Photos by Cory Weaver / for Lyric Opera of Kansas City