Estelle Jane Glatt Sosland is serving as the honorary chairman for this year’s Jewel Ball. She was married for 72 years to Morton Irvin Sosland who passed away on April 25th.

Estelle was the chairman of The Jewel Ball in 1991, the year that her grandson Andrew Russell Brown was presented. Another highlight of that Ball was Estelle’s idea: just before the waltz, the debutantes curtsied in tribute to Clara Stager Hockaday (Mrs. Burnham Hockaday), the co-founder and honorary chairman – and then Mrs. Hockaday waved at them. The evening was graced by the presence of many past chairmen, who were photographed by Roy Inman.

Estelle Jane Glatt, the daughter of Mr. and Mrs. Meyer S. Glatt grew up in Our Town, graduating from Notre Dame de Sion. She married Morton Irvin Sosland, the son of Mr. and Mrs. David N. Sosland, on June 6, 1946, at her parents’ home on Stratford Road, with the reception held in the garden. Their wedding trip was to New England. That same month, Estelle received her diploma from Smith College. The couple settled for a time in Boston, where Morton, an Army veteran, continued his studies at Harvard. Fortunately, they returned to Kansas City, where Morton’s career led him to be the chairman of the Sosland Publishing Company. 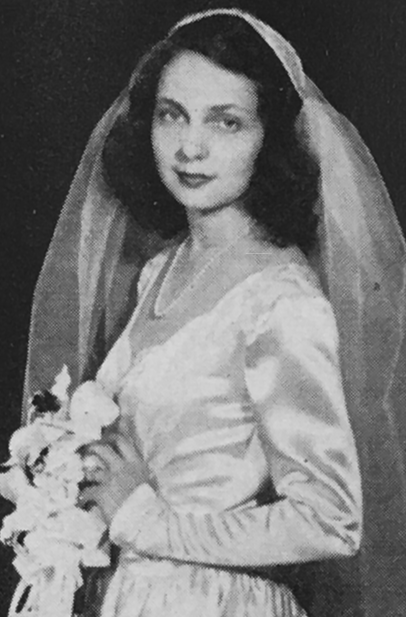 In addition, Estelle has served as a University trustee at The Nelson-Atkins Museum of Art and has been a trustee of the Oppenstein Brothers Foundation, which has given the Museum a grant in her honor. She was very involved in Young Audiences, of which she was on the national board of directors. Education is important to the Sosland family, and Estelle served on the advisory board of The University of Kansas Hall Center for the Humanities.

From their early days together, Estelle and Morton shared an enthusiasm for collecting art. They relished donating art to The Nelson and to the community. The now-iconic Shuttlecocks created by Coosje van Bruggen and Claes Oldenburg were acquired through the generosity of the Sosland family in celebration of the arrival of their Sosland ancestors and relatives in the United States 100 years earlier. In 2009, the couple donated 34 objects created by Native Americans who lived on the Northwest Coast to The Nelson. These objects included baskets, blankets, bowls, carvings, and masks. Among the tribes represented were the Haida, Kwakiutl, and Tlingit. Kansas City, Missouri, Mayor Sly James proclaimed September 19, 2014 to be “Morton and Estelle Sosland Day” The pair were lauded in the proclamation as “widely respected champions of American Indian art and discerning collectors in the field.” The honor was deliberately timed to coincide with the public opening of the landmark exhibition, The Plains Indians: Artists of Earth and Sky at The Nelson.

This year, Andy Goldsworthy is creating Walking Wall at The Nelson. The wall will travel – literally – until it reaches its destination, in and around the Bloch Building. This site-specific installation is in honor of Estelle and Morton and was commissioned by the Hall Family Foundation.

Travel was an important aspect of Estelle and Morton’s life, both for his work and for their own enjoyment. They owned a house in England for more than 30 years, spending summers and even a few winter months there. Their favorite part? Having each of their grandchildren come for a long visit. Estelle loves Jack Russell terriers, as did Morton, and several have been part of the family. Estelle’s other favorite hobbies have included gardening and walking. In recent years, she and Jean Green could sometimes be seen out for a stroll in Loose Park.

Estelle and Morton had three children together: Amy Debra Sosland Brown, who was a Jewel Ball debutante in 1968, and Elizabeth Jane “Betsy” Sosland, who followed in her sister’s footsteps in 1970, and Charles Samuel Sosland, who is married to Jeanne Ryan Sosland.

Their grandchildren are Meyer Joseph Sosland, who was a member of the floor committee in 1998 (now The Gentlemen of The Jewel Ball), and Sarah and Sophie, Jewel Ball debutantes in 2000 and 2004, respectively. Meyer and his wife, Melinda “Mindy” Scudder Sosland, have two daughters: Rosa Suzanne was a page at The Jewel Ball in 2015, and Isabel Ruth will be a page this June. Sarah is married to Benton Ashley Smith, and they are the parents of a daughter, Aviva. Sophie and her husband, Ryan Christopher Reich, have one son, Amon. Andrew Brown and his wife, Kate Miller Brown, are the parents of Julia and Charlotte.

This year’s Jewel Ball will be held on June 22nd at The Nelson-Atkins Museum of Art. Wendy Hockaday Burcham (Mrs. James Grant Burcham) is serving as chairman.