Wayne Larson is the national marketing manager at EFL Associates, a CBIZ Company. He loves connecting with people, which eventually led him to Ronald McDonald House Charities of Kansas City (RMHC-KC). Its mission is to reduce the burden of childhood illness on children and their families by providing a “home away from home” while their children are receiving medical care in Our Town’s hospitals. “Wayne expressed a desire to become involved and jumped right into volunteering at our Cherry Street House,” said Emily Gretzinger, RMHC-KC. “In addition, he was nominated to serve on the Red Shoe Society board. Not only did we immediately see Wayne at the Houses playing catch with the kids, but he was planning social functions and asking for donations for our events.”

According to Emily, one word comes to mind when she thinks of Wayne – enthusiastic. He’s always the first to reach out to prospective members and lead a meal group. Last year, RMHC-KC developed a new event called Pull a Plane. Wayne was an instrumental member of the fundraising and event planning. He stepped up to help promote it, raised funds in a peer-to-peer format and encouraged his team members to fundraise as well. He also was on the ground, helping set up and led some of the games. As a result, the event was a great success for the charity and raised awareness for a new crowd of people. “We surpassed our goal and raised $62,000. Wayne’s team alone raised $4,200., and we had close to 300 new fundraisers introduced to the mission,” said Emily. 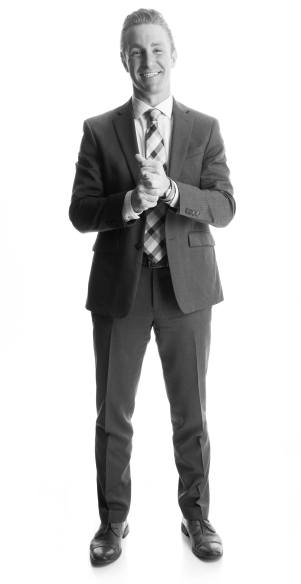 Not only does Wayne fundraise, but he is at the Houses on a regular basis. He makes a point to serve and cook meals at least once a quarter for the RMH-KC families after they have experienced a long day at the hospital. “Wayne provides them with a warm meal and nourishment for their bodies and also lends a listening ear,” said Emily. “He truly engages with the families, whether they want to talk about their child’s illness or the Royals bullpen.” Because of his ability to connect with people, Wayne brings in new, young people who haven’t seen how RMH-KC operates and encourages them to interact with the families staying at the Houses.

Wayne also has also been involved with Youth Entrepreneurs of Kansas and Missouri as a Business Plan Adviser with Hogan Prep Academy and won its BPA award for the 2015-16 school year. Youth Entrepreneurs is a non profit that teaches high school students business and entrepreneurial skills and helps them develop business plans during a year-long class. The organization partners with 13 different high schools in Our Town and is in 59 high schools altogether across Kansas, Missouri, Oklahoma, and Texas. Said Tiffany Staley, Youth Entrepreneurs: “Wayne is from Wichita, and he participated in Youth Entrepreneurs in high school. It’s always nice when alumni give back by donating their time and experience. In the classroom, he is very approachable, impactful and provides students with good social skills. Wayne also does a good job of helping them develop their business plans.” Added Wayne: “I try to honor the students and give them the best experience from a business perspective.”

In addition, Wayne was involved with Family Promise, a job training and shelter for the homeless in Lawrence, Kansas. He stayed overnight with families and helped around the Family Promise main facility.

Wayne feels that being a Rising Star, Class of 2016, has been a fantastic experience and is honored to be recognized. “When I started living in Kansas City in 2014, I made a New Year’s resolution that I would get involved in the philanthropic community. I don’t have big capital connections, but my goal is to get the Netflix-watching millennials off the couch and engaged in volunteering. I am good at carrying the sword and rounding up the troops.”