CALL IT WHAT YOU WILL: Singer wins hearts while defying categorization

Stacey Kent’s lush, limpid voice can melt your heart in an instant, it can transport you to Antônio Jobim’s Brazil or Jacques Brel’s Paris, or it can make you fall in love as if for the first time. Though she is considered a jazz artist (one critic called her vocalism “the epitome of jazz sophistication”), her elegant sound defies easy pigeonholing: You simply have to hear it to understand its delicious, aching mood.

Happily, on February 22nd the Folly Jazz Series will bring Stacey to Kansas City as part of a season that features two prominent “ladies of jazz.” On March 7th the Series will also feature Brazilian-born singer-percussionist Luciana Souza, who performs her own “song cycle” The Book of Longing.

This is the first Kansas City appearance for Stacey (“I’ve never been asked before!” she said), a New Yorker who studied comparative literature at Sarah Lawrence College before attending London’s Guildhall School (for a year). Her musical interests were always broad, but from an early age she was drawn both to suave vocalism and to “jazz,” whatever that is!

“My first two record purchases … were Carole King’s Tapestry and Ella and Duke at the Cote D’Azur,” she said recently from Palm Springs, where she and her husband, saxophonist Jim Tomlinson, were on a tour of China, Japan, Belgium, Sweden, Denmark, Norway, Spain, England, France, Portugal, Bulgaria, and the United States. “I was probably 12,” she said. “I knew Ella but I didn’t know who Louis Armstrong was.” Mostly, she loved the way the LP cover looked: “It was just grey and grainy and gorgeous. … And I was completely drawn in: I would listen to that thing over and over and over. I didn’t know it was jazz! But I memorized those solos.”

Stacey grew up around a wide range of music, but like most young people she didn’t discriminate or categorize. “Music is music is music,” she said. Her family lived a few blocks from the Metropolitan Opera with its legendary singers, while at home she listened to Sinatra and Pink Floyd, and to her older siblings’ “hippie” records (Cat Stevens, Joni Mitchell, Crosby, Stills, Nash & Young).

“Music is about a beat and a pulse and a groove, and how it makes people feel,” she said, when asked whether one can “define” jazz. “If you strip it down and get away from the commercial aspect … it’s just music people find appealing.” Walk into a store with Stan Getz on the sound system, for example, and you’ve suddenly transcended genre. “People don’t know what it is, they don’t know what it’s called, they don’t know its ‘category,’ … but it makes them feel good.”

Still, as Stacey explored wide-ranging styles of music in her youth, she found herself gravitating toward Stan and Ella and Satchmo and Miles and Bird. “I was so drawn to jazz,” she said. “Music can ‘make its way in’ without you even realizing it. And you don’t even have to know what the genre is. I love that part of it.” 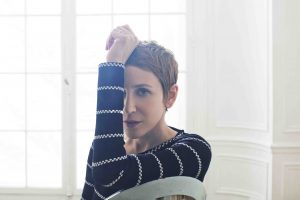 During the 1990s, Stacey focused on the “American songbook,” much as Ella, Sarah Vaughan and others had done a half-century earlier. But she found herself drawn to the magical world of Jobim and his bossa nova style, and those around her found that her velvety sound was extremely well-suited to it.

But she also explored French songs (she had grown up speaking fluent French with her Russian-born grandfather) and by then she and Jim began to feel it was time to move beyond the “songbook.” “Portuguese and French feel very natural to me for what I do,” she said. And as with everything she sings, in any language, she finds that as her repertoire widens, the themes remain the same. “They all tell very universal stories, they all have common threads: This bag of emotions that we human beings have. These songs are all very human, and yet our own story feeds into them.”

The couple’s 2007 Breakfast on the Morning Tram, a collaboration with British novelist and lyricist Kazuo Ishiguro (Remains of the Day) earned Stacey and her collaborators their first Grammy Award nomination. But that is just one of a range of accolades for Stacey, who was awarded the Chevalier dans l’Ordre des Arts et des Lettres by the French Minister of Culture.

In 2017 she released her first fully orchestral album, I Know I Dream, with arrangements by Tommy Laurence, which was widely acclaimed. “Her voice is sometimes a whisper, sometimes a confiding murmur, sometimes an exhilarated exclamation,” as one critic in Bang & Olufsen Magazine attempted to summarize Stacey’s artistry. “But whatever the idiom or the mood, individual listeners frequently feel that Stacey’s music was intended for their ears only.”

Stacey said she feels equally at home in jazz clubs and in theaters, and that she is looking forward to performing in the resplendent 120-year-old Folly Theater. The daughter of an eminent architect, she said that a physical space affects musical experiences in ways that we sometimes don’t comprehend.

“I’m so affected by the architecture of a space, the minute I walk into the hall—and I see the carpet, and what they do with the lighting. … It just gets me in a particular mood.”

Though it’s true that the intimate atmosphere of a night club can engender a relaxed audience interaction, a theater the size of the Folly can also be warm and comforting. “You get a sense of things, you see people leaning on each other, a head is on a shoulder. It’s so intimate. … That’s part of the joy in what I do: creating a personal experience, even in a big theater.”

For tickets call 816-474-4444 or go to follytheater.org. Stacey and Jim will be joined by Art Hirahara (piano), Tom Hubbard (bass), and Anthony Pinciotti (drums). To reach Paul Horsley, performing arts editor; send an email to paul@kcindependent.com or find him on Facebook (paul.horsley.501) or Twitter (@phorsleycritic).