The operatic version of the Romeo and Juliet legend that Bellini and his librettist Felice Romani created from Italian sources predating Shakespeare is at least as action-packed as the bard’s telling, perhaps even more so. The Lyric Opera has devoted considerable resources to its production of this gripping bel canto opera, The Capulets and the Montagues, which opened September 21st at the Muriel Kauffman Theatre, and it shows. With luxurious if controversial scenic and costume designs by Victoria Tzykun and world-class singing by local hero Joyce DiDonato (Romeo) and Nicole Cabell (Juliet), this clearly ranks among the more auspicious productions the Lyric has shouldered in its increasingly plausible determination to become a first-class American opera company. If one can get past Bellini’s rather narrow musical vocabulary and simply enjoy the glamorously delicious melodies, this is a show that even the staunchest of Shakespeareans can accept as a valid and intriguing alternative to the play we know and love. True, with a lesser cast and crew this opera can sound tepid, but the polished professionalism of the Lyric’s production makes for a bracing theatrical experience.

Modern audiences are faced with an immediate challenge in this opera, namely the notion of a woman, albeit a mezzo-soprano, playing Romeo. Bellini was relying partly on a Baroque convention that might have seemed archaic already in 1830 (though by no means foreign), but for us this convention – especially in a Romantic-period opera – can have an impact on our perception of the love-duo’s dynamic. As much as the team has tried to dress Joyce in macho-biker leather, she remains, in her aura and countenance, a woman. Verisimilitude is made even more problematic by Joyce’s diminutive height relative to Nicole’s, not to mention her long blond pony tail. At best this adds a fun twist to the relationship, for as much as Romeo is the “man” here, the forthright Juliet that Nicole creates – with a physical and vocal strength that easily matches that of Joyce’s Romeo – makes you wonder who, indeed, would have worn the trousers in this family.

Traditionalists might find Victoria’s high-concept modernistic design disconcerting in the context of a 19th-century opera, but the team has carried out the concept with care and consistency. Rather than 13th-century Verona we find ourselves in an apocalyptic world outside of time and space, with a “uni-set” representing a bank vault handsomely outfitted with a huge staircase stage-left and a vast wall of faux-brass safe deposit boxes stage-right, which are apparently ransacked between Acts 1 and 2. The Capulets have sequestered themselves here for protection – their wealth depleted to the point where Juliet is their most valuable remaining asset. She is betrothed to Tebaldo, though, and the idea of her marrying a Montague is horrifying to all. Director Kevin Newbury begins the action during the Overture, with a silent scene of Capellio’s son (presumably), being carried off on a funeral bier: He has died at Romeo’s hands, though we later learn that our hero felt so bad about it that he wept in battle.

Act 1 begins jarringly, with flashing green emergency lights that warn of a possible attack and prompt the company to don gas masks. For many, concerns about the modern setting will recede as the music gets meaty: Indeed, in Tebaldo’s first aria (“È serbata e questo acciaro”) William Burden shows off a suave, many-hued tenor that is strong but quite natural, semi-shaky only at the very outset. One is immediately sympathetic: Tebaldo doesn’t seem like a bad sort at all, and we understand why he should feel he has a claim to Juliet. All around him are well-armed male soldier-choristers dressed in combat garb from a variety of periods. (The women are never seen, only heard off-stage.) They are quick on the draw, to an uneasy degree, and they spend a great deal of time pointing way too many guns at Romeo and others. 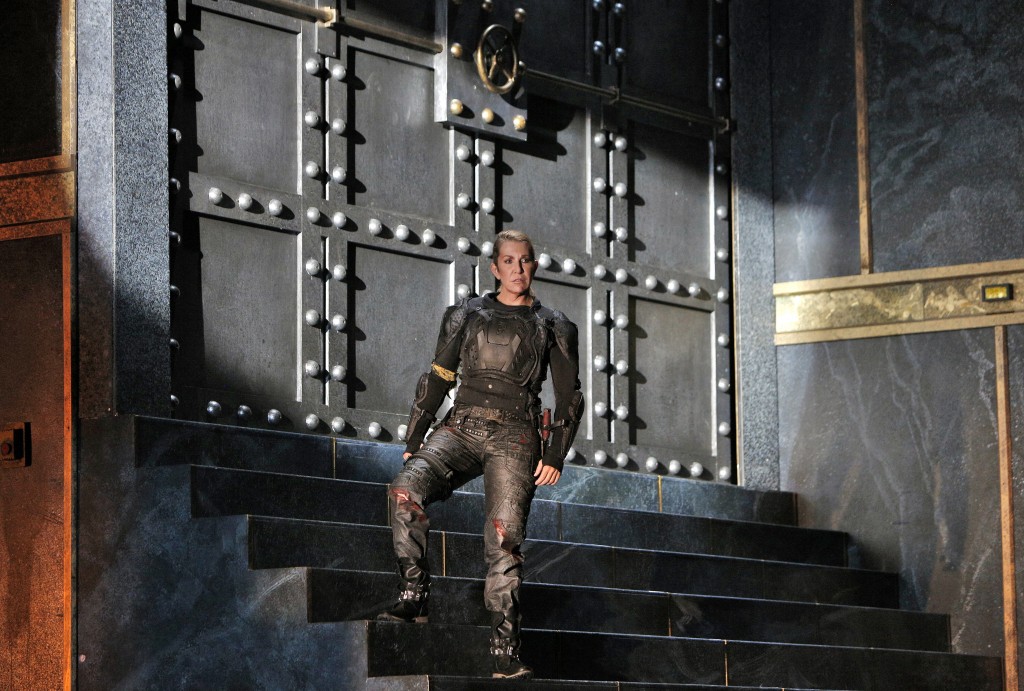 There is no sweet romance here, no party scene, no balcony banter to ease us into this version: Instead we are thrown right into the midst of the strife, with Romeo (mistaken for an envoy) visiting the sequestered Capulets to offer peace. His offer includes a union between Romeo and Juliet as a means of bonding the families toward future peace. The offer is rejected and things quickly get out of hand. Joyce, in her opening aria (“Se Romeo t’uccise un figlio”), takes us to another place altogether, with her gorgeously creamy mezzo and dazzling technique whereby every note is in just the right place. If she at times overdoes the heroic ardor, her embellishments of musical repetitions are spot-on, and she is a splendid actor all around.

The second scene reveals that the giant doors stage-left actually lead to Juliet’s boudoir, beautifully decorated with gold-and-tan drapery-like panels that resemble, intentionally perhaps, a lovely padded cell. Nicole is riveting in her opening aria (“Oh! quante volte”), in which she mourns her plight while marveling in the beauty of her wedding dress. With power and control over a wide range, her voice has a dazzling clarity, even muscularity, and her movements and expressions slide easily through emotions large and small. She is even more compelling in her beautiful, almost Verdian Act 2 aria, “Morte io non temo, il sai,” one of Bellini’s finest lyrical moments.

The eye is as engaged as the ear in this production, thanks to Kevin’s almost perpetual-motion direction. He keeps things moving with expert intuition, with only occasional lapses: The knife-fight between Romeo and Tebaldo seems forced (it is fortunately interrupted by the offstage chorus announcing Juliet’s “death”), and things slow to a near-halt in the final tomb scene. (Bellini and his librettist share the blame here, as this ending inevitably feels a bit drawn-out.) The twofold goal of both set design and direction is, ultimately, quite convincing: To keep the mind occupied, even during Bellini’s more languorous moments, and to evoke a sense of claustrophobia – as the whole opera is set essentially in the same “room.” Kudos also go to the naturalistic wig and makeup designs by Alison Hanks and to lighting by Japhy Weideman, which gave warmth to Act 1 and introduced startling visual elements into the emotional revelations of Act 2.

The remaining cast consists of only two other singers. Stephen Morscheck sings a rich, stately Capellio, imbuing the character with equal parts sympathy and indignation – though during orchestral fortissimos his gentle voice was easily lost. White-bearded Julien Robbins is quite wonderful as Lorenzo, his delicious bass-baritone making the character seem even more significant than the libretto outlines. The chorus performed pretty admirably on opening night: The men, armed to the teeth and fully “deployed,” had plenty to do in addition to singing, which could explain some occasionally untidy ensemble. The women in Act 2 lent tender clarity to their offstage lament. Ward Holmquist had prepared the score with loving care, and he conducted the Kansas City Symphony with a conviction that brought reason even to the odder musical moments. All in all, this Capuleti was good enough that it could almost spoil local audiences into expecting productions like this all the time, and at this point there is no reason we should settle for anything less.

To reach Paul Horsley, performing arts editor, send email to phorsley@sbcglobal.net or find him on Facebook (paul.horsley.501) or Twitter (@phorsleycritic).

STRONG ENOUGH: Performers find resilience and innovation in the midst of crisis

If the current arts crunch has demonstrated anything, it is the resilience of performing artists. All three of the founding artistic directors we spoke with recently emphasized the same trends…

The arts have marched at the forefront of most every major cultural movement in history. In Kansas City, performing arts organizations large and small have begun to recognize the importance…