Planning a wedding by creating a Pinterest board? Here at The Independent, we have something better: the archives.

One of our favorite wedding photos is of Loula Long Combs, who became Mrs. Robert Pryor Combs in July 1917. Loula was a renown horsewoman, constantly surrounded by grooms, but only the kind who carry currycombs, not diamond rings. The Independent had desperately wanted her to get married for years – there were constant asides about Loula catching the eye of this Earl (Count, Duke, etc.) at a horse show, or of smitten young heirs arriving in Our Town with the goal of sweeping her out of the saddle and down the aisle. R. Pryor Combs, her bridegroom, was the son of the Reverend George Hamilton Combs, the first minister of the Country Club Christian Church.

Her dress is short by the standards of the era, and it is her veil that swirls behind her. The rug that so nicely outlines the lace of her veil is no photographer’s prop, either. (The gleaming adornment on her wrist is probably a gold bracelet, even though it looks to the modern eye like a wristwatch.) Loula is shown in profile and at a distance. Often, that was done to put the bridal gown in the spotlight. Here, it may have had an additional purpose: Loula was 37 years old at a time when girls tended to wed by 22. (Pryor? Oh, he was in his thirties, too.) During the early years of the 20th century, it wasn’t uncommon for brides to pose against painted backdrops. Loula had an advantage – that’s her parents’ house, Corinthian Hall, behind her. (If it looks familiar, that’s because you’ve visited the Kansas City Museum in recent years.)

Another photo we love is a candid from October 1939 of Bebo and Dick Sloan, both 22. Dick was every bit as gallant as he looks, but perhaps not quite as tall. His bride was diminutive. As our scribe wrote, “Remember way back in your doll playing days, wasn’t there always a bride doll in a princess dress with a bustle, her tulle veil caught with a sprig of lilies of the valley and the same delicate lilies making up her bouquet? Well, the favorite bride doll of our cherished collection came to life last Saturday night. It was Louise Melissa (Bebo) Morrison treading a petaled path at Westminster Congregational Church to meet Herbert Adams (Dick) Sloan, Jr., who awaited her at the altar, before a background of white chrysanthemums, tree ferns and twinkling tapers. Perhaps the sweetest moment of all came later in the evening, at the home of the bride’s parents. The photo caption can still make us sigh and make our hearts flutter, more than 75 years later: “We were eavesdropping when this charming photograph was made and overheard the bride whisper to her bridegroom, ‘Do you still love me?’” 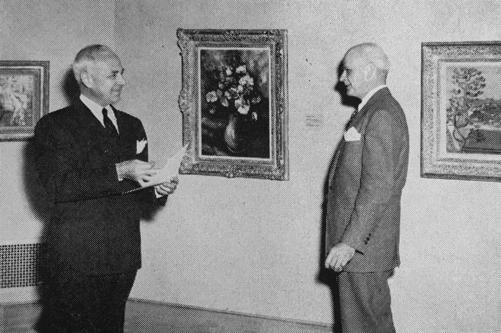 Paul Gardner arrived in Our Town early in 1932. At that time, he was the assistant to the Trustees of the William Rockhill Nelson Trust. Paul took up residence at…