NOTE: Since the publication of this article, the Lyric Opera has announced that, in light of new Covid-19 restrictions, live performances of ‘Amahl and the Night Visitors’ cannot take place. However, the Lyric is filming the production, using the originally announced cast, puppeteers, and set designs. Beginning December 15th the company will offer a high-quality video of the production for home viewing. To purchase, see contact information below.

Gian Carlo Menotti’s Amahl and the Night Visitors, which received its NBC Opera Theatre premiere on Christmas Eve 1951, became one of the biggest hits in television history. And as the first opera commissioned specifically for live performance on television, it was also a musical milestone. “It may be said at once that television, operatically speaking, has come of age,” wrote Olin Downes in a rare front-page review in The New York Times the next day, adding that Menotti’s “tender and exquisite piece” formed a “historic event in the rapidly evolving art of television.”

And there was Hallmark Cards, Inc., front and center, which had gone to considerable expense to sponsor the landmark broadcast. Few Kansas Citians realize, in fact, the remarkable role that Hallmark played in the popularization of opera in America during the second half of the 20th century. That all began with Amahl.

In the early 1950s, when television sets were becoming a fixture of households worldwide, Hallmark founder and CEO Joyce Clyde “J.C.” Hall was one of a handful of visionaries who saw the medium’s potential: not just for “horse operas,” he said, but for a wide range of programming.

“It was argued that an opera was hardly the type of show to get much attention on television,” Joyce wrote of Amahl in his 1979 memoir, When You Care Enough. “But I felt we could use the show to thank all the people who bought Hallmark cards … and it was a beautiful show. We received thousands of letters, cards and telegrams thanking us for presenting it. The opera was beloved by adults and children alike and acclaimed by critics as a Christmas classic.” 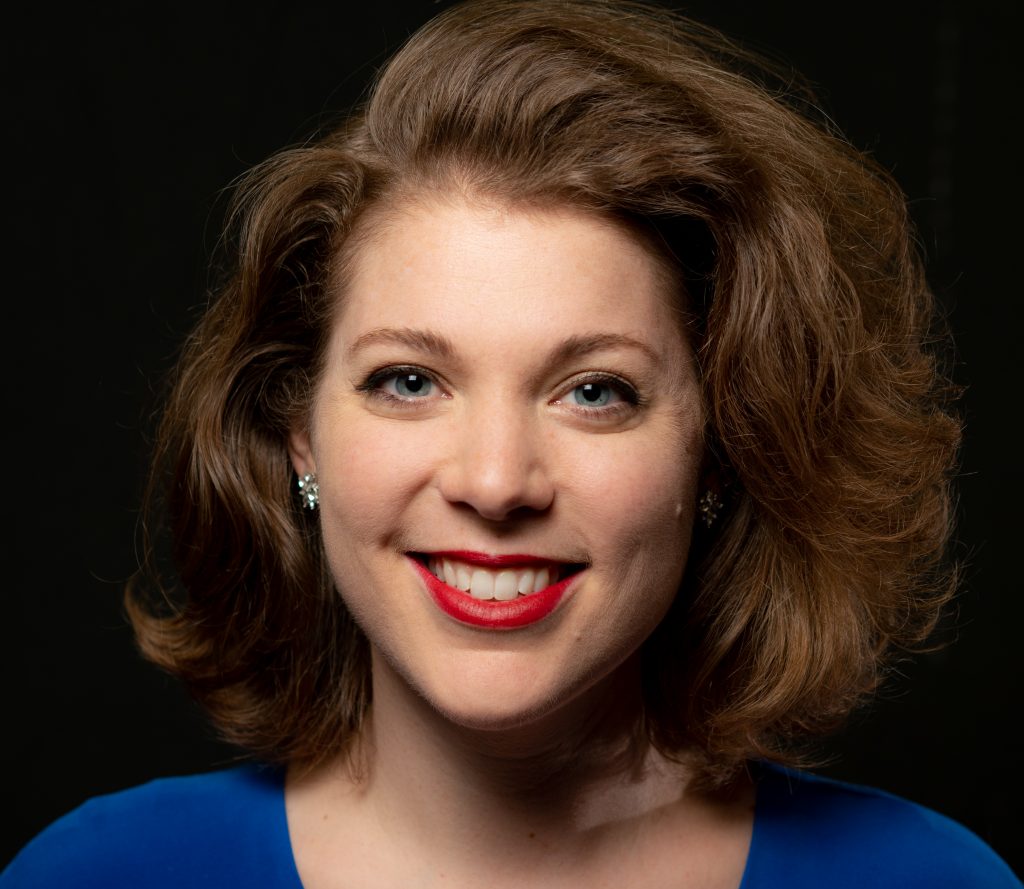 Even Joyce was a bit surprised, it seemed, at the continued demand for the piece. “The moving story of the lame boy, Amahl, with Menotti’s magnificent music, was so successful we repeated it by popular demand at Easter the next year in spite of its Christmas theme,” he wrote. “Then we found ourselves showing it again at Christmas. In 1953 it became the first sponsored network show to appear in color.”

Amahl helped establish Hallmark as a force in cultural programming, and it formed a spark for what would later be called the Hallmark Hall of Fame. “The simple truth,” Joyce later stated, “is that good television is good business.” 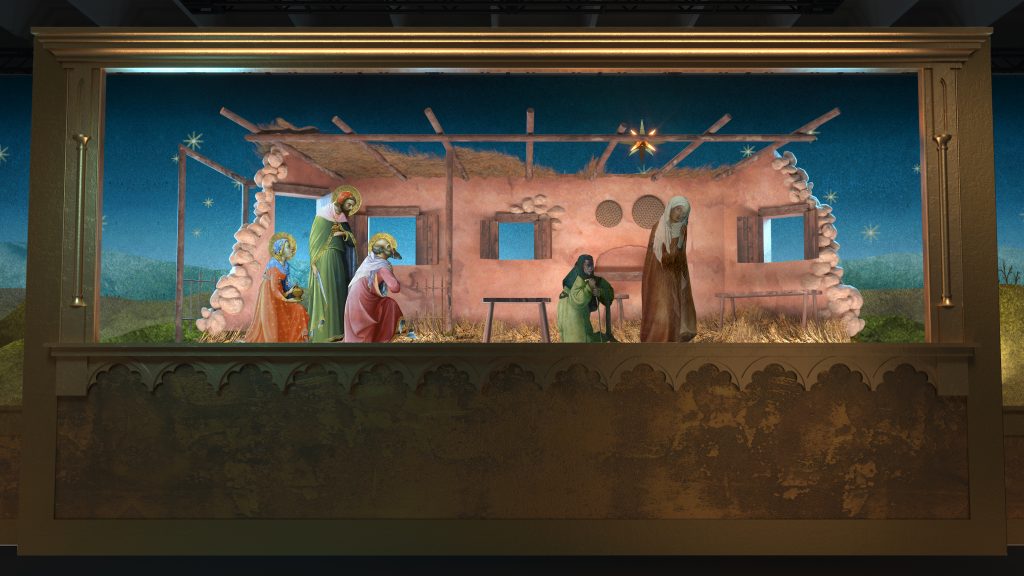 This December 3rd through the 6th, the Lyric Opera of Kansas City presents its first performances of Amahl in nearly three decades, in an ingenious “Covid-safe” production using puppets newly created by master designer Paul Mesner and featuring live musicians spaced widely on either side of the elegant new set design by Steven Kemp. The production, which takes place at the Lyric’s Michael and Ginger Frost Production Arts Building, presents a strong a cast of locally-based singers and instrumentalists. Around 70 audience members at a time will be seated, on risers, in a safely distanced manner.

Amahl forms part of the Lyric Opera’s revamped 2020-2021 season, which includes cancellations of two previously announced Spring productions but also presents innovations such as the New Visions series. “We at the Lyric Opera have created new programming that reimagines what we can do to serve our community,” said Deborah Sandler, the Lyric’s general director.

There are reasons why Amahl has traditionally been performed around the holidays. “It’s an opera about generosity,” said Shawna Lucey, who directs the production. “It’s a reminder of how much we receive when we are generous. … It’s a piece that we humans, we Americans, need right now.”

Amahl imagines the three Magi stopping for a rest on their journey to see the baby Jesus. As they display the lavish gifts they plan to deliver to Bethlehem, they witness a reciprocal generosity from Amahl’s own community, culminating in an act of enormous good-will from the disabled boy himself.

“It reminds us of the inherent generosity of children,” said Shawna, who directed the Lyric’s Lucia this spring, “and how much we as adults need to be reminded of how much we, too, were once inherently generous, in the way that Amahl is.”

The Lyric has chosen Shawna for this project partly because of her previous experience with puppets (at New York’s Bread and Puppet Theater), but also because of her gifts for collaborative direction, which will come in handy when corralling puppeteers and singers simultaneously. During a global pandemic, she said, “puppets might be the perfect way to present this piece, because puppets are able to touch each other when we humans really shouldn’t.”

Despite its brevity, Amahl feels like a complete opera. “It says what it needs to say in a short time,” said baritone Daniel Belcher, who performs as King Melchoir. “It’s very fully written, in that each of the kings gets his moment. And the Mother’s aria, barely three minutes, says what it needs to say and yet still has a wonderful sweep to it. … It’s pretty extraordinary that an opera can create a complete dramatic arc in this space of time.”

Perhaps with the aim of making Amahl a holiday tradition, the Lyric has commissioned Steven to design a rather extravagant set, with a rough-hewn central hut and a 95-foot-long cyclorama serving as a backdrop. The goal is to make an intimate space in which “the audience can be a part of the action,” Steven said, “and to create a little bit of ‘surround-sound,’ with the musicians and the singers enveloping the whole space.

In creating the feel of a “triptych,” with the hut flanked by singers stage-left and the orchestra stage-right, Steven is evoking the Hieronymus Bosch painting (The Adoration of the Magi) that initially inspired Menotti. “It’s as if this early-Renaissance painting has sort of sprung to life,” he said.

In an introduction preceding the 1951 broadcast, the composer reminisced on his own childhood in Italy, where the Magi (not Santa Claus) brought gifts. “It’s an opera for children because it comes right out of my own childhood. And I want you to realize that it was very difficult to capture my childhood on television because when I was a child, television had very little to do with my upbringing.”

The composer recounted how the idea for Amahl had come to him in a flash one day that December, as he strolled through New York’s Metropolitan Museum. “I was supposed to finish an opera for NBC,” he said, “and I just didn’t have an idea in my head. So I was walking one afternoon, rather gloomily, through the Metropolitan Museum, and I chanced to stop in front of this painting by Hieronymus Bosch. And as I was looking at it, I suddenly heard again the weird song of those Three Kings. And I suddenly realized that they had come back to me, and they had brought me a gift. And the opera you’ll hear tonight is the gift of these Three Kings.”

Opera singers are not normally called upon to sing “from the wings,” as it were, much less to be upstaged by puppets. “It’s going to be different from anything I’ve experienced,” said Danny, a veteran of the Lyric stage (and of major opera houses around the world) who is also a Kansas City native and teaches at William Jewell College. “It’s a wonderful process of discovery.”

One big impact of the pandemic has been that “it is teaching us not to rely on what I’ve relied on during the past 20 years,” Danny added. “It’s breaking every rule, some of which maybe needed to be broken. … We’re learning to tell stories in a manner that leaves the proscenium theater. And when we go back to the proscenium theater, we will view it differently. There’s a lot we’re going to gain from this experience.”