Nadine Sierra shot to the top of the opera world with a glittering burst of speed. At age 20, the Florida-born soprano became the youngest-ever Grand Finalist at America’s most prestigious vocal competition, the Metropolitan Opera National Council Auditions. She went on to score big at major houses (San Francisco, Paris, La Scala, Berlin’s Staatsoper). In 2015 she made a celebrated Metropolitan Opera debut, as Gilda in Rigoletto. Opera magazine wrote that her “limpid tone and delicate phrasing proved ideal for the naive, sheltered girl, as did her lithe, slightly fragile appearance.”

Recently she reaped two more of opera’s “gold stars,” the Richard Tucker Award and the Beverly Sills Artist Award. Meanwhile she has continued to conquer major houses of the world: Opéra National de Paris, Madrid, La Fenice, and many others. Last year, she released There’s a Place for Us, a disc that allowed the daughter of immigrants to celebrate America’s multi-ethnic heritage in her own way. (Nadine’s mother is Portuguese; her father is of Puerto Rican and Italian descent.)

Nadine has appeared in Vogue, Nylon, and Bon Appetit. Yet she remains one of the most grounded musicians I’ve ever interviewed. “I’m a Taurus, so my sign is an earth sign,” she said with a laugh. “I’m down to earth … and I’m not ashamed of showing it.” As a Latina, she is proud to perform in Latin America and especially Mexico, where she finds “the people are so unbelievably appreciative that it’s just irresistible.” Yes, it is difficult to fit these concerts into an international touring schedule. “But it’s worth it,” she said.

On October 19th, Nadine will dash from a Metropolitan Opera run as Susanna (in The Marriage of Figaro) for a one-night Harriman-Jewell Series recital at the Folly Theater. And she said the audience can expect some friendly banter amongst the songs and opera arias.

“Some people in the industry frown upon that,” she said. “They think a recital should be taken very seriously, with an almost stoic expectancy. … We have to keep in mind that we’re not living 100 years ago, we’re living today. … Entertainment is seen in a very different way than it used to be, and we have to sort of evolve with the expectations: give our audience members a memorable experience, so that they come back again.”

Collaborating with Nadine for the Folly Theater program is her longtime pal and co-conspirator, pianist Bryan Wagorn. “We were at the Mannes School together, so we’ve had a friendship of 12 years or so,” she said. “We’ve kind of ‘grown up’ together, not just as friends but as musicians.” Artists often find that, as they enter the upper echelons of music, it becomes more and more difficult to find people who’ll tell them the truth about how they sound. “Bryan is probably the kindest musician that I’ve known … and he knows just how to tell an artist the truth: to give very good criticism but also be encouraging and super-supportive. … That’s hard to come by.”

Clark Morris, the Harriman’s executive and artistic director, couldn’t be more pleased about presenting the Kansas City debut of one of opera’s biggest stars. “Our opera fans are really excited about it,” he said. “But certainly there’ll be people in the hall for whom she’s a discovery. That’s the whole reason we exist, so that Kansas City gets exposure to these great artists.” 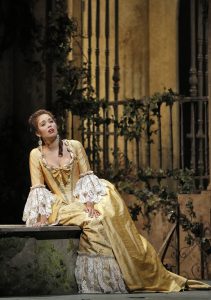 Nadine loves singing opera arias on recitals, even removed from their original contexts, because that’s the way she came to love them. “I almost prefer it,” she said. “I don’t have the limitations of costumes being strapped to me, or having to deal with a set, or with director’s ‘take.’ I can just rely on my experience and artistry and love for the piece, to give it to the audience in its purest form.”

This program “represents who I am as an artist,” she said. Familiar opera arias, especially, “can make an audience member feel more at ease, especially someone who has not been exposed to opera or classical music.” Her hope is that “it can make an everlasting impression, and can kind of encourage people to come to the opera, or to more concerts such as this.”

Nadine’s own love of opera was sparked by watching a VHS tape of La Bohème she checked out from the public library as a child. (She apologizes to the library for having kept the tape.) Ironically Mimì, the consumptive heroine of Puccini’s opera, is the role that Nadine most yearns to perform. But her voice is still better suited for Mozart, for the bel canto repertoire, and for a few of the somewhat heavier soprano roles (Manon, Violetta.)

“I can’t pretend that I have a bigger voice than I do,” she said, adding that she has a wonderful team helping to guide her through the vicissitudes of a career. “Thankfully I have a lot of people on my side I can trust, who tell me the truth and who support and sometimes influence my decisions.” 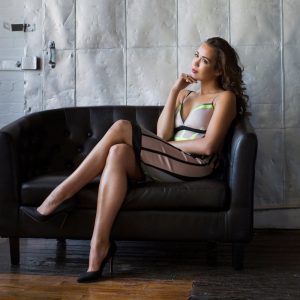 Inevitably, she finds that her sound is becoming fuller and richer, a natural evolution for many sopranos entering their thirties. “And because of that, it does require a bit more air pressure, a bit more muscle, a bit more tension even. … And that’s normal because I’m growing older, my body is becoming more womanly, more secure.

“In a positive way. I like the feeling, because I can give more color, especially to the dramatic moments, than I could before. And that’s a really, really powerful feeling. The most memorable moments in opera are usually the most tragic ones: They’re the moments that leave a lasting impression. … So for me to be able to do that dramatically with my voice is a really cool feeling.”

Mimì is not in the cards yet, but it might not be far off. “I definitely want to become Mimì at some point,” Nadine said. “Bohème is the opera that introduced me to the art form … that made me fall in love with opera, when I was so young. … The moment I get to sing that role, I will feel complete as a singer.”

Nadine’s recital includes arias by Gounod, Charpentier, Donizetti, and Giménez, and songs by Schubert, Schumann, Strauss, Villa-Lobos, Ernani Braga, and Joaquin Rodrigo. For tickets call 816-415-5025 or go to hjseries.org.
To reach Paul Horsley, performing arts editor; send an email to paul@kcindependent.com or find him on Facebook or Twitter (@phorsleycritic).