It was a wedding announcement in this magazine from about 50 years ago that got us thinking about the role of the bridegroom. The photo featured a traditionally clad bride happily dancing with her new husband. He was dressed more like the front man for a rock group than a groom. A close reading of the caption revealed that, yes, he had a band. A-ha! The Independent in those days didn’t divulge details about employment in its nuptial news. No doubt Martha Gaylord, the longtime owner of the magazine, and the editorial staff, which included Pat Patzer, gave serious thought to this. They probably took into account the fact that some subscribers would call to ask questions about the long-haired young man. (What became of the newlyweds? We don’t know. We wish them all the best.)

The wedding day is a milestone in the life of both members of the couple. Throughout the history of The Independent, though, the bride has generally been the focal point. The gown she chooses, the flowers she carries – these are featured in the announcements for eager readers who may not even be acquainted with the couple. This is also true at the ceremony itself. All eyes are on her as she walks down the aisle. No one could mistake the bride for one of her bridesmaids – her outfit sets her apart. The groom, meanwhile, often is amid a group of similarly dressed men. (Comedian Jerry Seinfeld has a theory about this: in case the groom bolts, one of the other fellows can just take his place. He’s kidding, of course. He raises a good point when he asks why, if there is a “best man,” the bride marries someone else? Yes, it does seem as though the bride’s choice should be the best.)

Pictured here is a man who appears to be an ideal groom. His name is Howard Albert Austin, Jr. He married Mary Virginia Snow on April 27, 1946. He was 30, older than the average first-time groom of the period. (What’s that? How old was the bride? Oh, we’ll never tell.) Howard was a Yale graduate who had served as a lieutenant in the United States Navy. His military experiences included the Normandy invasion and the Okinawa campaign. In later life, Howard was an executive with the Prudential Insurance Company of America. Alas, he would die at 55, only months after his 25th wedding anniversary. The New York Times noted in his obituary: “While a student at Yale, he won the Aurelian Medal of Honor for scholarship, leadership and character. In 1941, he was graduated at the top of a class of 739 at the Great Lakes Midshipmen’s School in Chicago.” (He certainly sounds like the sort of man anyone would be happy to have as a son-in-law.) 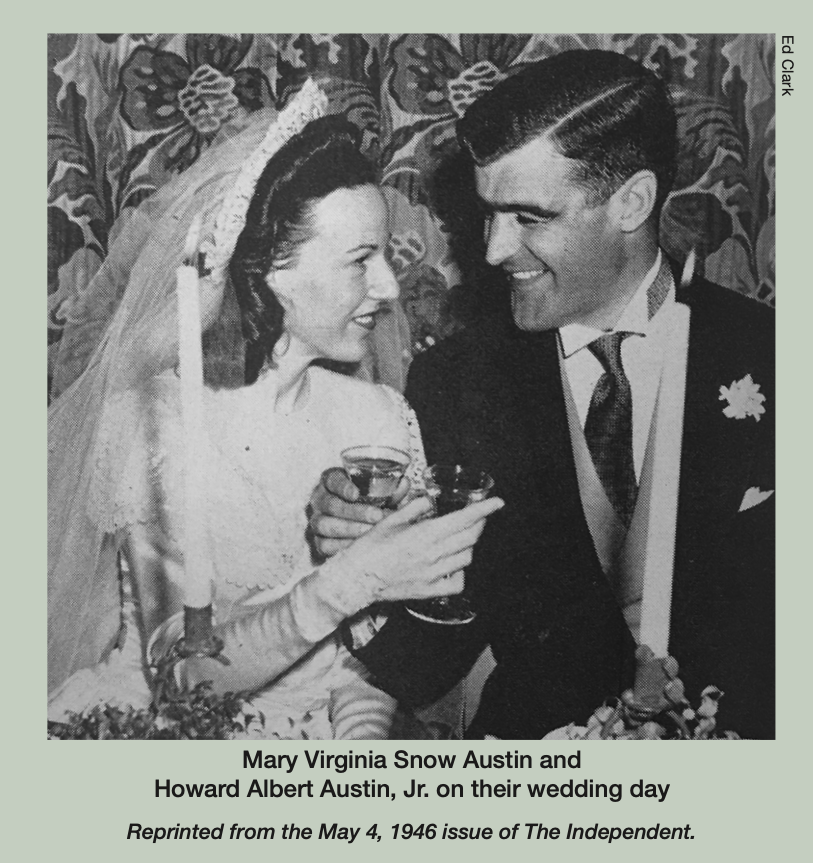 We must pause to applaud Howard’s choice of a bride. Mary Virginia Snow, (who was known as Dinny), was a career girl. While living in New York, she was the director of John Powers’ School, which offered training for potential fashion models. The 10-week course featured lessons in grooming, posture, and voice. In 1944, newspapers around the country printed an article spotlighting her comments that there was nothing attractive about being bored and blasé. In her view, maintaining intellectual curiosity and showing interest and enthusiasm were essential.

Perhaps Howard took some pointers from his bride. The expressions on their faces show their delight in each other’s company. Then, too, as a man who had seen war, he may have recognized that there was no need to approach the wedding day with apprehension. He knew to hire a good barber and a good tailor, and to get a good night’s sleep before the festivities.

The Snow-Austin ceremony took place in the morning. Judging from the photo, what Howard was wearing might have been the formal outfit called a morning coat, (also known as a cutaway), possibly similar to what a June 1934 article in Esquire magazine advocated: “The Groom wears a black or Oxford grey cutaway, one button peaked lapel model, with trousers of grey with black and white stripes; double breasted waistcoat of white linen; white shirt with starched bosom and cuffs, and a bold wing collar; black polished calf shoes with linen spats to match the waistcoat.” (The tie isn’t mentioned here, perhaps because there were many options. We think Howard made a handsome selection.)

Men’s fashion, especially for formal occasions, has generally been less subject to radical change than women’s clothes. In addition, World War II had ended just months earlier. The coming years would see changes in styles, (for example, Christian Dior’s introduction of “The New Look” for women in 1947), but that hadn’t happened yet.

Morning coats remain a classic for daytime weddings. The tuxedo, invented in 1886, has been popular for evening ceremonies for generations. The 1960s and 1970s saw more self-expression, with couples writing their own vows and choosing less traditional attire. The 1980s prompted a return to formality. Later, there was a rise in destination weddings, often with the wedding party and guests barefoot on sandy beaches.

According to a 2019 New York Times article, there has been a shift in recent years. Grooms are wearing suits. They’re also selecting a wider range of colors, ranging from conservative grays and blues to jewel tones, such as emerald and ruby. These days, there is an added emphasis on fit, as opposed to the boxier or baggier menswear of earlier times. Accessories matter, too – but what we most like is the look of absolute bliss on a groom’s face as he sees his beloved.