Find what you love to do, and find the time to pursue it – that’s advice for a happy life. Virginia French Mackie got a head start. She was only three years old when her mother began teaching her to play the piano. She lived to be 104, and she filled the intervening years with music.

Virginia was born in Lancaster, Missouri, on August 15, 1900. She moved with her family to Hutchinson, Kansas, as a young girl. Before she graduated from high school, Virginia wrote a song for the school that remained familiar to alumni for decades to come. While at Wellesley College, she found time to march for women’s suffrage. Virginia earned the Billings Prize and was a member of Phi Beta Kappa. After earning a master’s degree at Columbia University in New York, she taught at a junior college in Our Town. It was then that she met David Charles Mackie, a University of Kansas graduate who had attended Harvard Business School. At that time, he was a banker, but his goal was to become an architect.

In 1928, Virginia and David were wed. During the early years of their marriage, they lived in New Haven, Connecticut. David was a student at the Yale School of Architecture, and Virginia was teaching music at Smith College in Northampton, Massachusetts. They spent summers in Europe, where Virginia continued her musical studies with Nadia Boulanger at Fontainebleu in France and in Tobias Matthay’s studio in London, along with her friend Dame Myra Hess. Virginia and David both received diplomas from Fontainebleu.

The Mackies returned to Kansas City in 1934 and welcomed a son, David French Mackie on April 13, 1937. Virginia became a professor at the University of Kansas City (now the University of Missouri–Kansas City) and remained there for a quarter of a century. One of her protégés was a graduate student named Shirley Bean, who later was a faculty member at the UMKC Conservatory for 34 years. Virginia also taught summer classes at Yale. She was a soloist with the Kansas City Philharmonic, and she frequently gave recitals. Her husband’s work included design, restoration, and preservation projects, as well as partnership in a firm with Lloyd Roark.

For many years, the Mackie family lived at 5315 Mission Woods Road. In May 1949, their home was on the Wellesley Garden Tour. As the Kansas City Star noted, “The Missouri colonial home of Mr. and Mrs. David C. Mackie… reflects the owners’ interest in music, architecture and landscape design. Into its construction went brick, made by hand in 1831, from an early Kansas City church, later razed; heavy copper downspouts from the old D. O. Smart home on Independence 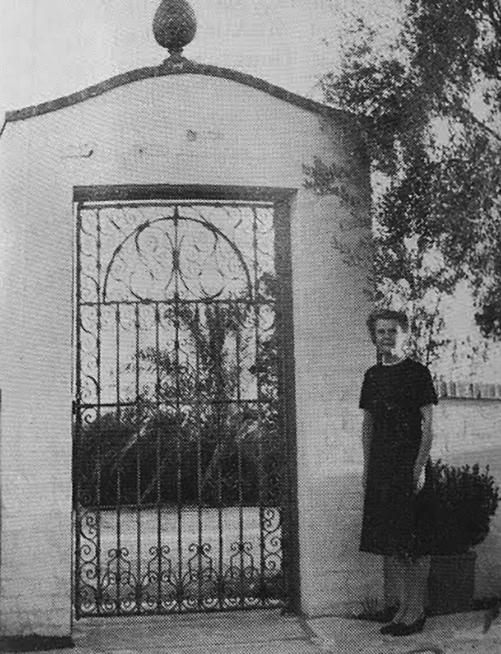 avenue; and iron grill work on the balcony, found in St. Charles, first capital of Missouri.”

Young David went to Pembroke-Country Day School (very close to home) and then to Yale University. He had completed his service in the United States Navy and was a law student at Yale when his parents decided to pull up stakes. Virginia and her husband moved to Tucson, Arizona, in 1963. As our scribe wrote the following year:

“The David C. Mackies’ longtime residence in Kansas City was a much-admired French Provincial gem on the hillside on Mission Woods Road… The Mackies have recently moved into an equally impressive house in Tucson, styled to blend with the history and traditions of the Southwest. Guests approaching 4925 La Lomita Road in the Catalina Foothills see first the magnificent gate, a 17th Century Spanish piece from the William Randolph Hearst estate. It was a Christmas gift last year to Mrs. Mackie from her architect husband. Beyond the gate, they have a view of the spectacular Catalinas, and from the garden side, the lights of Tucson and the Tucson range in the background.”

Virginia, as one might imagine, was already lining up recital dates. She added the University of Arizona to her résumé, teaching there for 12 years and receiving an honorary degree in 1974.

David C. Mackie continued to practice as an architect until his death in 1972. His obituary in The Independent depicted a man of many talents:

“Everything around David Mackie reflected his impeccable taste. He employed that quality in his work as an architect and in his connoisseuring of every fine thing in life: antiques, or a gourmet dish; his always-right manner of dress; or his gardens, often personally designed and tended. With his keen sense of humor and twinkling eyes, Mr. Mackie made an engaging story teller. He excelled in the conversational art, the wealth of information he carried making it virtually unheard of to talk with David Mackie and not learn something.”

Virginia soldiered on, moving to Santa Fe, New Mexico, in 1975. (It probably won’t surprise anyone to learn that John Crosby, the founder of the Santa Fe Opera, was one of her former students.) She taught music appreciation. She also reconnected with an old friend from Kansas City, Mary Lou Cook, who was one of the founders of the Living Treasures program, which honors the achievements of elders in Santa Fe. Virginia was named a Living Treasure in June 1985. (Mary Lou Cook received that honor in April 1988. Preceding them in September 1984 was another former Kansas Citian, Dorothy Scarritt McKibbin, late of the Manhattan Project.) 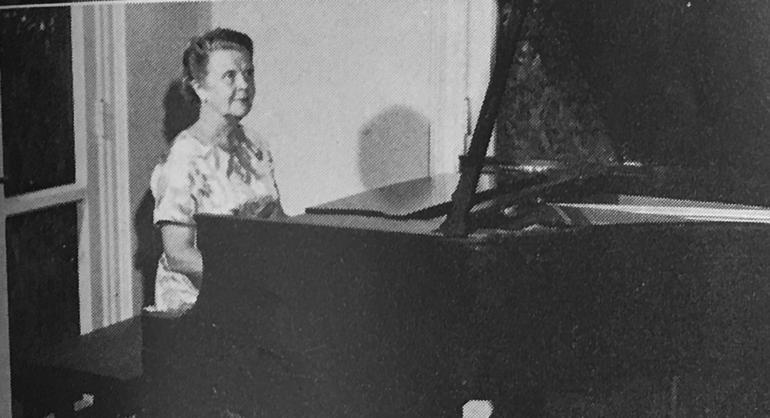 “I’m never lonely with the piano,” Virginia told Laura Rollins Hockaday of the Kansas City Star in May 1989. “I’m in my high 80s now. If you give up, you go down hill and can’t remember your name. And I’ve learned when you memorize music, you listen more.” Virginia was in Town to give two days of lectures on Franz Joseph Haydn. During that time, she played eight of his sonatas. At commencement, she received an honorary doctorate. Dr. Shirley Bean said this of a recent visit to her former professor, “she played the piano, moved to the harpsichord and then took up a Hopi Indian flute.”

Virginia flourished through the decades. She continued to teach until she was 104. She died in 2005. To find what you love at three and still be at it one hundred years later – what could be better?

Reprinted from the May 2, 1953 issue of The Independent.
By Heather N. Paxton