In May 1933, The Independent published an anecdote about Patti Harding Abernathy and Taylor Stevenson Abernathy, who had been Mr. and Mrs. for more than 15 years. Patti changed her hairstyle for a party. What did Taylor think of her new look? “Her husband remarked that he liked her bangs because she looked as she did when she was a small girl, when he teased her over the back fence.”

Patti was the daughter of Mary Joel Atkinson Harding and John T. Harding, who was a lawyer. The Hardings lived next door to Dr. Flavel Tiffany, who built a castle at 100 Garfield that is still standing. Taylor’s parents, Mary Stevenson Abernathy and Henry T. Abernathy, had a house nearby. At some point, both families moved to the Roanoke-Valentine neighborhood. The Abernathys built a stone house at 3600 Madison Avenue that overlooked Roanoke Park. Taylor went to Hamilton College in New York, which had been his father’s alma mater. He played fullback on the football team and took an unpaid internship (not a term used in that era) at a bank, just to learn the business. In later years, Taylor would follow his father and grandfather as head of First National Bank. Patti studied at Ogontz School in Pennsylvania. On November 22, 1915, Patti and Taylor were married by Robert Nelson Spencer at St. Paul’s Episcopal Church. Among the wedding guests was Taylor’s grandmother, Mrs. James Logan Abernathy. Her husband, Colonel Abernathy, had been in the furniture business in Leavenworth, Kansas, in addition to being a bank founder.

Following a honeymoon in California, the young couple took up residence at 3714 Belleview Avenue. During the early years of their marriage, Taylor worked first at First National Bank and then at Gate City National Bank. He returned to First National Bank in the 1920s and remained there until his retirement.

Patti and Taylor both loved travel, golf, and entertaining. La Jolla, California, was their summer spot of choice for more than 40 years. In addition, for 14 years, they spent winter vacations in Florida. They were members of the Kansas City Country Club. Society news often recorded them giving golf luncheons, (there’s a term that’s gone out of fashion, but deserves to be revived), in addition to other parties.

Patti and Mrs. Harry Goodwin, Jr. appeared in print ads for Butter-Nut Bread that ran in the newspaper in June 1927. (It wasn’t unheard of for socialites on the East Coast to do this, but it was a rarity in Our Town in that era.) Patti further made an impact on the media when she was interviewed for a 1930 article on whether husbands should be allowed to have female friends, (not to be confused with girlfriends). As far as she was concerned, that was fine.

More than a decade after their wedding, Patti and Taylor became the parents of a daughter, Patricia Abernathy, who was born in September 1927. Pepper, a female Dandie Dinmont terrier, who lived to be at least 15, rounded out the household. 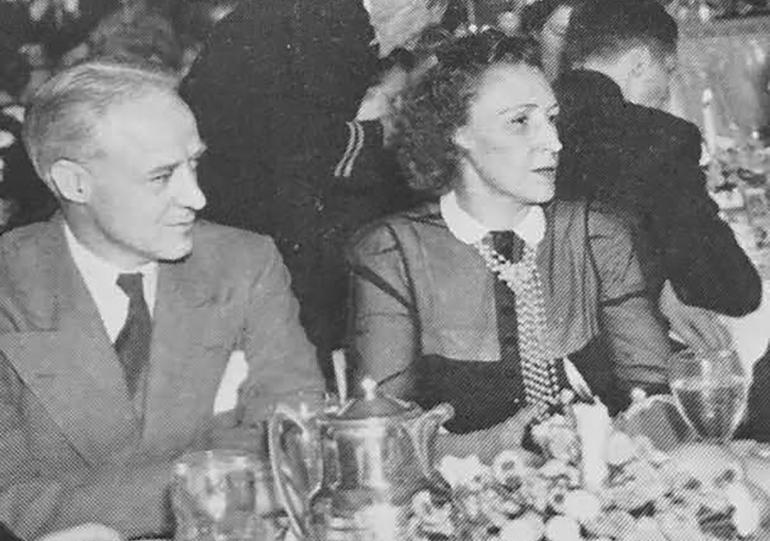 The Abernathys were a civic-minded couple. As a young woman, Patti was involved in the Junior League and appeared in many editions of its Follies. Taylor served as the grand jury foreman in a corruption probe in Kansas City in January 1940. That October, he was chairman of the Coronation Ball at the American Royal. Patti took an interest in war work. She was active in the American Red Cross and chairman of the ambulance training unit of the Motor Corps. Patti hosted tea parties for organizations such as The Barstow School, where Taylor was a member of the board of trustees, and the Kansas City Art Institute. The Abernathys’ memberships included St. Andrew’s Episcopal Church, The River Club, and the Kansas City Club, and Patti was a member of the Westport Garden Club.

In January 1947, Taylor was named president of the First National Bank. Early in 1948, Patti and Taylor vacationed in New York and visited Patricia, who was by then a student at her mother’s alma mater, Ogontz, in Pennsylvania. September 1948 saw Kansas City University begin construction of a law school; Taylor was a university trustee at the time. By 1955, the Abernathys were grandparents.

In 1961, Taylor became the chairman of the First National Bank. That June, the couple masterminded a cocktail buffet at The Kansas City Country Club that enthralled guests: “The imaginative hostess, whose social trademark when entertaining in her French house [which was designed by architect David Mackie and located on West 56th Street] is Gallic red and pink décor, veered to Italian Renaissance for the soirée with exquisite effect. Guests entered the club on a glowing pink carpet, lined with rows of tall, round trees of pink and wine peonies, spotlighted in pink. Hundreds of the blooms in the two hues made a symphony of color throughout the club; achieving the zenith of beauty at the two buffets where the heady blossoms rose in shaded tiers from graceful, pink trumpet-shaped urns. Faded red linens and more of the flowers arrayed individual tables. The color motif was synchronized in the dessert: giant strawberries, served from a cart canopied in pink chiffon and tasseled in wine. Elegantly attired guests were seen ‘La Pachanga-ing’ as Latin music made the air tingle.”

June 1969 saw them give yet another memorable party: “The Taylor S. Abernathy’s dinner dance at [T]he Kansas City Country Club took its color cue from the pinks of June roses. Round tables for six and eight were placed companionably close – alternating bouquets of pink roses on deep pink linen with red roses against pale pink cloths. The buffet was presided over by chefs in shocking pink aprons and paler pink hats, and it was so laden, there had to be an auxiliary spot for desserts. The sweets were arrayed on a corner baker’s rack of wrought iron. Pink was the color, too, of embroidered Lorganza, designed for dancing …. and it was a dancing crowd, delighted by Tony DiPardo’s music.”

When Patti died in 1978, her obituary in The Independent described her as “a gay-spirited young woman who became a stunning exponent of fashion and one of Kansas City’s most innovative hostesses.” The book First Century, a history of First National Bank, was published in 1986. In it, Taylor was described as having “a tough banker’s mind behind his modest, reserved manner.” He died the following year. The First National Bank building at 14 West 10th Street remains, though not as a bank: in 2004, it reopened as the Central Branch of the Kansas City Public Library.