LOVE IS A MADNESS: Actors find Kansas City ideal for career and for ‘happily ever after’

Life doesn’t always imitate art, but it usually imitates Shakespeare. When Hillary Clemens and Matt Schwader first met in 2010 in Wisconsin, performing Rosalind and Orlando in the American Players Theatre’s As You Like It, they could hardly have known it would be the first of many such collaborations. “We got along really well, and had great chemistry in the show,” said Hillary, a Liberty native who lived in Chicago at the time. 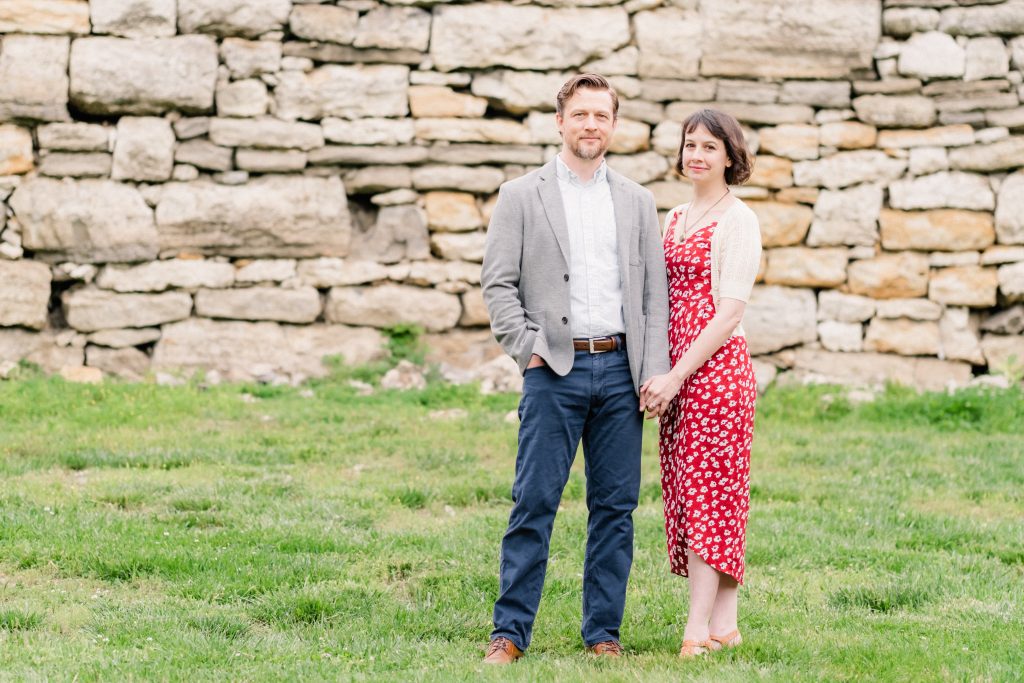 In real life, the actors were both in relationships with other people, so it was important that they establish a professional standing. “We loved the experience, and we became friends,” Matt said. The three of us were chatting in the “sylvan glade” known as Southmoreland Park, where the Heart of America Shakespeare Festival would have been playing if not for Covid-19, and where Hillary and Matt played lovers (again) last year in HASF’s brilliant Shakespeare in Love.

But back to Wisconsin: As fate would have it, As You Like It was just the right play for the moment. Shakespeare’s Rosalind (strong-minded, shrewd, wittily playful) disguises herself as the boy Ganymede to “counsel” Orlando on the vicissitudes of romantic attachments.

“Love is merely a madness and, I tell you, deserves as well a dark house and a whip as madmen do,” she tells Orlando. For much of the play the characters keep their distance, as did the actors. But eventually Rosalind and Orlando realize they are quite fond of each other, “Ganymede’s” warnings notwithstanding. By the end they’ve joined hearts. And within a couple of years after the production, so had Hillary and Matt. 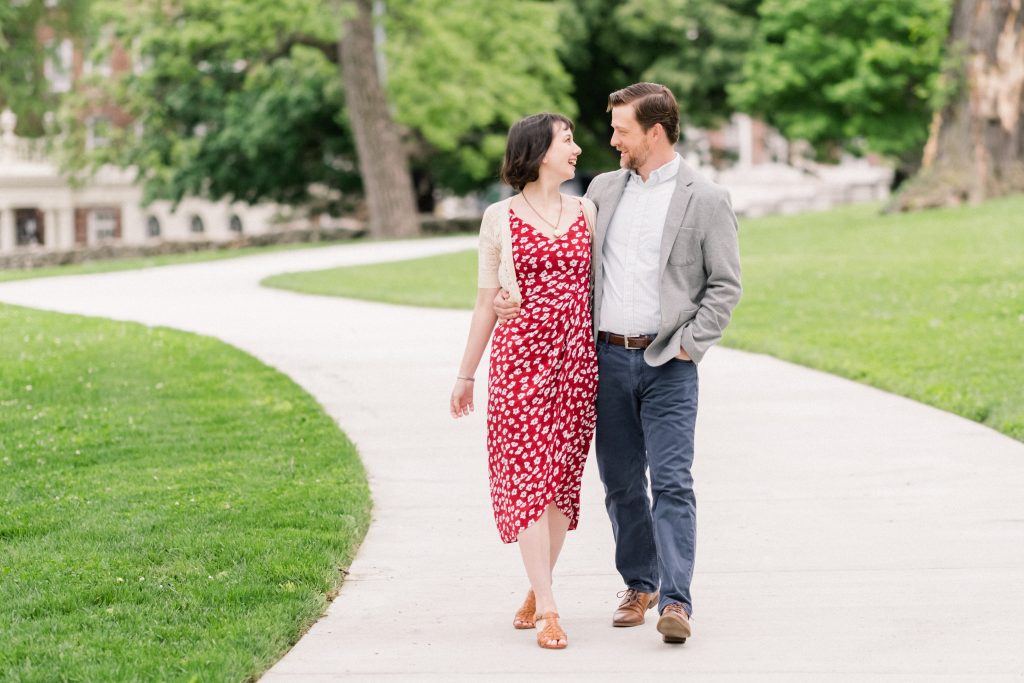 Since marrying in 2014, they have become inseparable. And the productions they’ve shared continue to reflect and refract their real-life experiences: not just Romeo and Juliet (at Lake Tahoe Shakespeare Festival) and Will and Viola (at HASF), but even as Daisy and Gatsby (at Indiana Repertory Theatre). And don’t be surprised if some day you see them portraying the combative-but-secretly-in-love lead couple in Much Ado About Nothing.

When spouses perform together, a sort of theatrical shorthand can come into play, as Kansas Citians saw at last year’s Shakespeare Festival. “There’s a built-in level of trust,” Hillary said. “You have a sense of the other person’s timing. I can anticipate when I shouldn’t move, for example, because if I do it will step on the funny thing that he’s about to do.”

Granted, “That’s what you should be doing with your fellow actors in every show,” she said. But when two people are actually in love, you can feel it onstage. “I know what she knows, and she knows what I know,” added Matt, who likened it to playing doubles tennis. “If she serves something up, I’m like, ‘Oh, thank you!’ and that’s where great chemistry comes into play.” 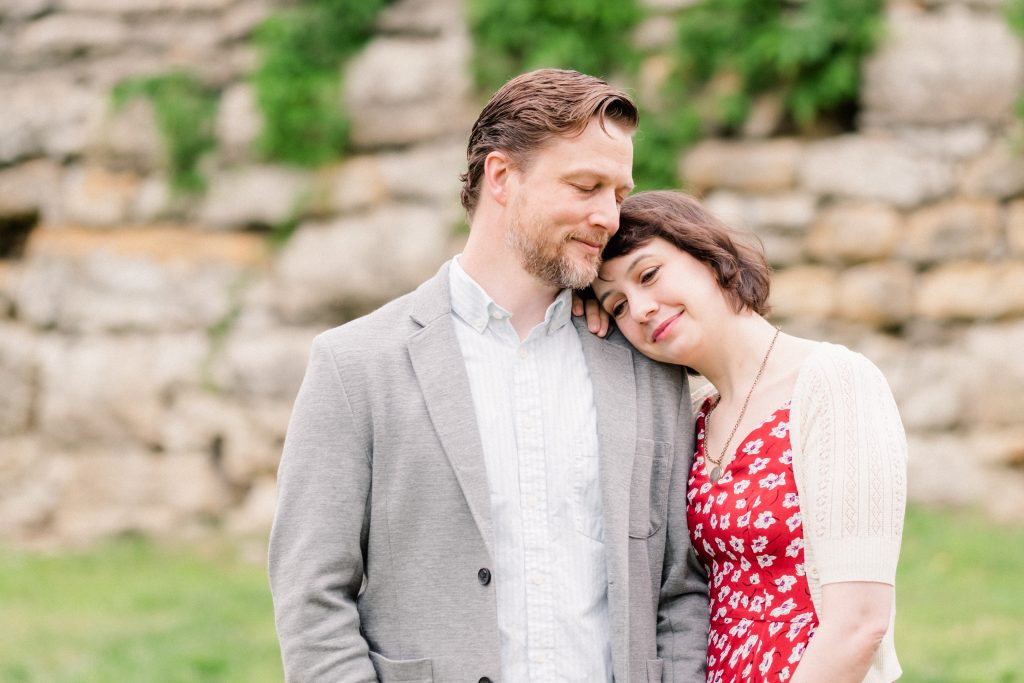 But what’s it like when two strong-willed actors live under the same roof? For Hillary and Matt, who in 2015 chose Kansas City over Seattle, it works partly because they are, in some respects, temperamental opposites. “Her ‘happy place’ is to be curled up, with a cat at her feet, reading a book in a window-seat,” said Matt with a laugh, “and mine’s hiking on a mountainside.” Sometimes they have to carve out personal space. “I say, I’m taking the kids to a state park,” Matt said. “She gets her alone time, and I get to be out in the woods with the kids.”

But most of the time, with a four-year-old and a two-year-old underfoot, their life is like an indie-film domestic farce: “Funny but also poignant,” Hillary said, “but not a full-on black comedy. … There’s a part where somebody’s sobbing. It’s about relationships.”

Hillary might see herself as something of an introvert, but she is as inventively strong-willed as Rosalind. Her résumé is impressive: She remains a company member of Chicago’s Gift Theatre, and she has worked at the Chicago Shakespeare Theatre, the Court Theatre, the Steppenwolf Theatre, Writers’ Theatre, Seattle Shakespeare Company, and many others.

Even as a student at St. Paul’s Episcopal School and Notre Dame de Sion High School, Hillary was a fixture of Kansas City theater. She performed at The Coterie, at Kansas City Repertory Theatre, and at HASF, where as a teenager she played Hero in the 1999 Much Ado About Nothing with John Rensenhouse, the late Elizabeth Robbins, and many others who were critical to her formative years.

“It feels so good to come back here, as someone who grew up working with these actors … idolizing and looking up to them,” Hillary said, adding that the lively theater scene in Kansas City was critical in the decision to relocate: and in particular, the chance for both of them to join the artistic team of Kansas City Actors Theatre. “Knowing that there are these extraordinary talents here, and getting to work with them at this phase in my life, is a real gift.”

Matt, on the other hand, took some convincing before he was ready to move to Kansas City. A veteran of the Chicago Shakespeare Theatre and a core member of the prestigious American Players Theatre, he couldn’t grasp initially that our city had become a theater hot-spot. His experiences in HASF’s Hamlet and KCAT’s And Then There Were None changed that.

“I had no idea how great of a city this is,” he said. “And it’s so great being around Hillary’s family, which is my family.” Then, in 2018, he became director of performance studies at Avila University, which helped the family build a financial foundation.

“We’ve been very lucky,” he said. “It’s not easy to make a living in the arts. … We’re interested in being a part of a community and building a legacy, rather than going from one gig to the next, and there’s not a better city to do that in right now than Kansas City.” 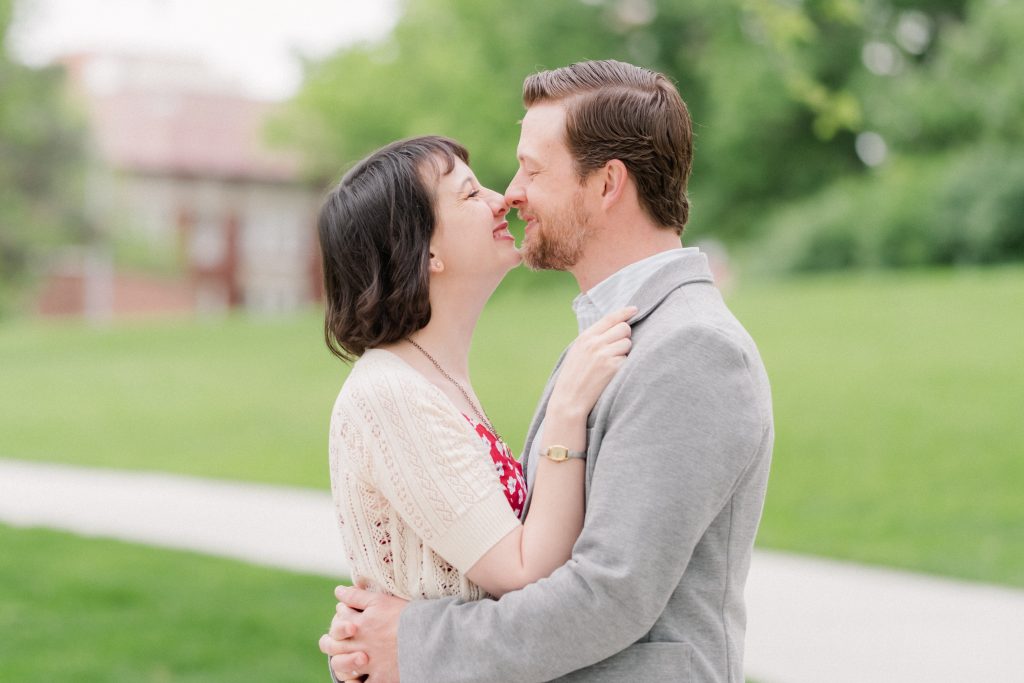 Someday, when their kids are older, they may try to resume the TV work they’d begun in Chicago (which included commercials and Chicago-based crime dramas). But television and film require a type scheduling flexibility that is not always compatible with family life. Moreover, it rarely affords actors the sort of live ensemble-work that Hillary and Matt find most satisfying. “There’s no community there,” Matt said. “It’s entirely a director’s and an editor’s medium, it’s not a performer’s medium.”

For now, with KCAT and Avila and a stream of great engagements (Hillary’s Nora in KCAT’s A Doll’s House last season was a sensation), they’re right where they want to be. And they’re so compatible that they often finish each other’s sentences. Matt: “I never wanted to be a movie star, I just wanted to be in a company …” Hillary: “… doing great work with great people at a great theater, as steadily as possible.”

For more information about Hillary and Matt go to hillaryclemens.com and mattschwader.com. To reach Paul Horsley, performing arts editor; send an email to paul@kcindependent.com or find him on Facebook (paul.horsley.501) or Twitter (@phorsleycritic).